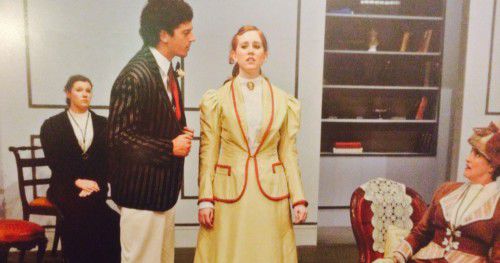 DIRECTOR Judi Crane’s entertaining new production of Oscar Wilde’s “The Importance of Being Earnest”, the most well known of his string of comedies written in the 1890s, captures the spirit of the play very well.

To be successful, the play needs skilled performers who can present the intent of a line that often differs from what is actually being said.

For the most part, the performers in this Canberra Rep production get it right.

Miles Thompson is outstanding as the young Algernon Moncrieff. His stylish playing never falters and his delivery of some of Wilde’s best lines is excellent.

Karen Vickery gives a strong performance as Lady Bracknell. She is formidable, as expected, but adds an unexpected playfulness to her character which works extremely well. Kayleigh Brewster gives a finely mannered performance as Gwendolyn and Jordan Best is almost unrecognisable in her delightfully funny performance as Miss Prism. The other players give nicely judged performances, although Michael Miller as the butler, Merriman, overplays to the point of caricature.

The play requires three settings and set designer Michael Sparks opted for simplicity with essentially the same set re-dressed for each scene. His design for the garden scene was the least successful, looking like another interior room.

Costumes by Heather Spong were nicely in period. The women’s hats were designed by Helen Drum but those worn by Karen Vickery had a tendency to shade her eyes.

Overall, Judi Crane has delivered a fine production of this classic play.