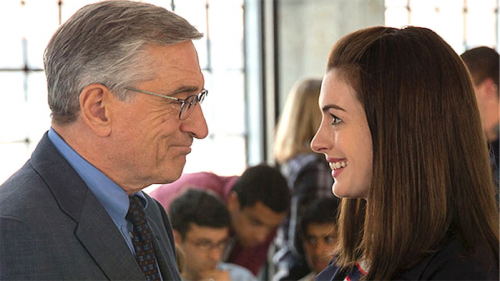 FOR Robert De Niro, the role of 70-ish widower Ben Whittaker in writer/director Nancy Myers’ romantic comedy is a doddle. Most of his screen time requires him to do little more than dress stylishly, whether for office or bedroom, and smile sweetly.

He’s playing opposite Anne Hathaway as Jules who has, within 18 months, built an online fashion store from five people into an operation employing more than 200. Ben has been a middle-level executive in a firm that publishes phone books. In lonely retirement, he has refused to spend his remaining time doing nothing. Jules has employed him as an intern whose main task is to tell her half-hourly if there have been any messages. Which is a refined form of doing nothing.

It gets better, at least for Ben, as Jules comes to depend increasingly on his no-nonsense, do-anything work ethic. She allows him into her private life and family, with no real crises but enough little ones to keep the plot simmering. At home in one of those brownstone terrace houses for which New York is noted, she has a house-husband and a sweet six-year-old daughter.

CityNews - April 13, 2021
0
Air quality in Canberra may be impacted this week with prescribed burns taking place in NSW and the ACT, warn ACT Health.