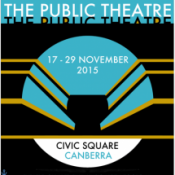 IN A week in which the world has been transfixed by the horrifying events unfolding in Paris, this absorbing work, written and performed with extraordinary intensity by Nick Delatovic, in Canberra’s newest performance venue in the very heart of the National Capital, provides a profoundly unsettling and disturbing experience.

Set in some unspecified time in the future when society has apparently devolved into a constant cycle of revolt and revival, “Bomb Collar” proves alarmingly relevant as it begins with a voice-over announcement warning the audience to remain calm in the event of a disturbance, assuring them that they will be safe.

A young man (Nick Delatovic) takes the stage, dressed in the remnants of a national costume. Around his neck, connected by electric wires to some unseen control point, is a device which he explains is a bomb collar likely to detonate should he say anything to offend his “oppressors”. He holds in his hand another device, explaining that it contains the last songs known to man, including some remembered from his grandmother.

Addressing his audience as if they are soldiers about to go into battle, he informs them that he is the last surviving singer on earth, and shares some of his songs, occasionally exhorting the audience to join in. Between songs he regales them with his thoughts and aspirations, while mourning the death of his 20 year old suicide bomber wife. Is he a terrorist? Is he delusional? Is he just some innocent singer caught up in an impossible situation? Audience members are left with many questions to ponder as they disperse into the balmy Canberra night.

The second presentation in an inaugural season of events, and presented with excellent lighting design and soundscape, “Bomb Collar” proved to be a thought-provoking experience and a superb demonstration of the potential of this beautifully designed pop-up theatre, which hopefully will become a regular fixture at Canberra events.

Paul Costigan - May 10, 2021
0
Last week the National Capital Authority announced its long-awaited Tree Management Policy. So much ambition to do so much for the trees on national land. Yet there was an obvious lingering question, writes columnist PAUL COSTIGAN...