AS the ACT government gives the green light to ridesharing, Unions ACT has warned that the arrival  of app-based booking services such as Uber does not excuse companies from their responsibility to workers and to the community. 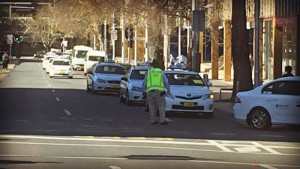 “Globally, Uber not only refuses to collectively bargain with drivers, but maintains the legal fiction that drivers are not Uber employees. This has the potential to undermine the living conditions of all Australian workers,” says Alex White, secretary of UnionsACT.

“Far from being ‘innovative’, companies like Uber are using a new technology to revive outdated and adverse employment relationships from the 19th century.”

The government says this will improve travel options for Canberrans, reduce fares for the community through competition and drive further innovation in the demand-responsive transport industry

The reforms will be delivered in two stages. The first stage will allow the regulated entry of ridesharing into the Canberra market, and deliver an immediate reduction of fees for taxis and hire cars, from October 30. The second stage will include a customised CTP and property insurance regime for rideshare activity and further reductions in regulatory burdens for taxis.

Ridesharing vehicles and drivers will undergo accreditation and registration, including criminal and driving history checks – just like taxi drivers. Vehicles must be checked for safety, and rideshare will be fully insured, ensuring safety for passengers, drivers and the community.

The ACT Government recognises that new business models may put pressure on Canberra’s existing taxi drivers and owners. That’s why from October 30 the Government will reduce costs for drivers and owners of taxis, halving taxi licence lease fees in 2016 and halving them again in 2017.  Annual licence fees for hire cars will also be significantly reduced.

Canberra’s taxi drivers will have access to multiple modes of business, from traditional rank-and-hail work to ridesharing and third-party taxi booking apps. This will increase productivity and income streams for drivers while providing a consistent and high-quality on-demand transport service for Canberrans.

The Minister assisting the Chief Minister on Transport Reform, Shane Rattenbury, says that taxi industry reform is part of broader reform to public transport, with benefits to the economy, the community and the environment.

“Taxis and other demand-responsive transport options are important for accessibility and social equity, and are often relied on by those with special transport needs. These reforms do not change the current arrangements – the wheelchair-accessible taxi service booking system and the Taxi Subsidy Scheme are unchanged,” he says.

Alex White says: “Unions will be closely scrutinising the announcement by the ACT government on the taxi industry deregulation.

“The decision by the ACT Government to ensure that drivers are covered by workers’ compensation laws is a positive step, and we look forward to examining the detail.

More information on the Taxi Industry Innovation Reforms, including public submissions received as part of the community consultation, will be available from act.gov.au/taxi-industry-reforms