RSPCA ACT informs us they have had another fantastic year for animal welfare, breaking multiple records across the board.

“While RSPCA ACT never euthanases an animal for space, it is sometimes difficult to keep them healthy in an environment where so many animals enter our shelter without knowing their full medical and behavioural history,” said Director of Animal Welfare, Jane Gregor.

“The fact that we had broken the record for kitten adoptions and the lowest euthanasia record for adult cats and dogs in the same year is really a testament to the hard work of the entire team keeping them healthy and rehoming them as quickly as possible.”

While achieving these results some might say that 2014/15 was actually the year of the inspectorate with nine successful prosecutions, 22 matters awaiting court decisions and 981 animals either seized or surrendered to RSPCA inspectors this year.

This is up from 0 prosecutions, 3 matters awaiting court decisions and 34 animals seized or surrendered via the inspectors the previous year.

“With almost 1000 animals coming in through our inspectors last year, I don’t think the team could have worked any harder to help abandoned, neglected and abused animals,” said CEO Tammy Ven Dange.

“We really hope that incoming numbers will go down in 2015/16. With the support of the greater Canberra community, we have plans to put more proactive measures in place to help us with this, but we are ready to respond to the same number of animal cruelty matters if we have to do so again.” 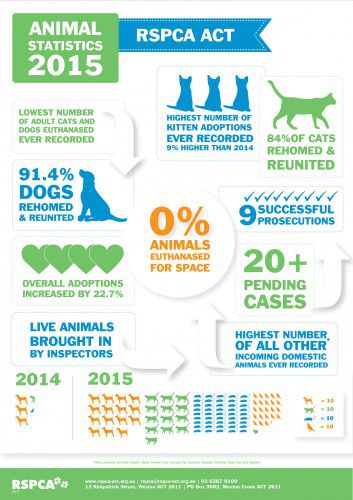 CityNews - April 1, 2020
0
CANBERRA has saved nothing for a rainy day. The economic hailstorm bearing down on the seven years of debt amassed by the profligate Barr government and its bloated public service can mean only more debt. Before the blame-it-on-coronavirus excuses start, JON STANHOPE exposes the $3 billion budget black hole.