According to Gary France, director of The Groove Warehouse in Hume, the newly-formed Caribbean-style Groove PANdemonium is the first and only steel band from the ACT to play at one of these events, which also features playoffs by steel bands from across Australia and New Zealand, performances by Australia’s top steelpan players, a Calypso night by professional Australian-Caribbean calypso musicians, public workshops, masquerade dancers and a steelpan exhibition —in short, creating pandemonium.

Groove PANdemonium will be performing on a 30+ set of Steel Pans made in Trinidad, will play traditional Calypso, Soca, and Reggae as well as special arrangements by bands like the Beach Boys, ABBA, Elvis and a host of other popular bands. Our current members include graduates of the ANU School of Music, members of our community and special patron from Trinidad, Canberra’s Courtney Leiba.

France, whose Groove Warehouse we featured earlier in the year, (https://citynews.com.au/2015/arts-in-a-thunderland-of-drums/) reports that the Warehouse’s World Music programs, Global Groove, are going well and that yesterday he presented a workshop to 24 Rotarians from Jerrabomberra.

As well, The Groove Warehouse will be sponsoring the Young Music Society Music Camp in January, where students will have the opportunity to engage in Gamelan, African Ensemble and Caribbean Steel.

But most exciting of all is “The Grooveline,” a new community based ensemble that meets at the Warehouse in Hume. One of the very few USA styled marching drumlines in Australia, it now has a full set of professional instruments imported from the USA. With members ranging from 13 – 55 years old, it is looking to recruit new members as it enters its second term. 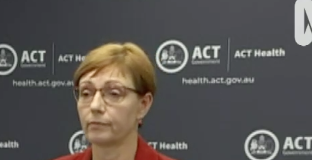 Dickson bus traveller was not symptomatic at the time

CityNews - March 25, 2020
0
The confirmed coronavirus case who was on a bus from Dickson to Kaleen on March 17 was not symptomatic at the time, says Health Minister Rachel Stephen-Smith.

No school, but the before and after care is open!