A very modest man who always looking for ‘the next thing’ has been the source of the priceless bequest to the National Gallery of Australia. 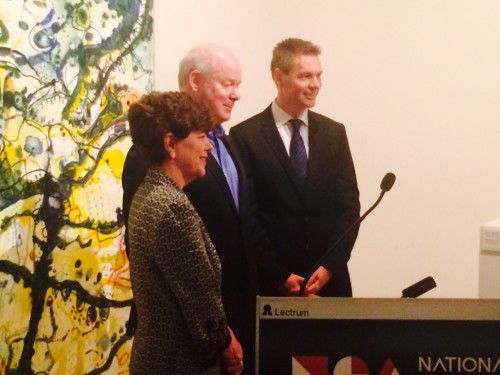 The late Alan Boxer, a former Federal Treasury official, a fastidious art collector and a long time voluntary guide at the gallery was, according to the executor of his estate, Kristian Pithie, a lifelong learner with over 1000 music recordings, more than 900 works of art and many, many books in his collection.

Pithie, a former director of Chapman Gallery in Manuka, was speaking at the NGA this morning, where 19 works were unveiled.

Describing the occasion. “As a very special day for a gallery,” National Gallery director Gerard Vaughan praised the late Boxer’s “great taste,” saying “he chose very, very carefully, and in the best way he was obsessive.”

That obsession, which began when he was a young Reader in Economics at Melbourne University and continued into his long career in Canberra from 1975, saw him outlaying part of his salary on paintings and paying them off, a sure sign, Dr Vaughan said, of his true dedication to art. “He was not a rich man so he had to work at it,” he added.

Boxer enjoyed a strong relationship with the Gallery over many years. He took a keen interest in the developing national collection, visiting the off-site store before the building opened to the public in 1982. His collection of Aboriginal art was formidable.

Partly because as a voluntary guide he knew the collection very well, Dr Vaughan said the Boxer bequest filled some notable gaps in the NGA’s collection, which had not until now had anything from Charles Blackman’s “Alice” series and had now Blackman’s “Rabbit tea party 1956–57.”

The same might be said for Williamstown 1956 by John Perceval, for an early painting by the late art critic Robert Hughes and for a large abstract painting by Stanislaus Rapotec. Albert Tucker’s “Gamblers and parrots 1960” was identified by Boxer himself as the first work of significance that he bought for his collection.

The Alan Boxer Bequest paintings are on show in the Australia galleries of the NGA. A full-colour  publicitation of works in the bequest is on sale in the NGA shop.