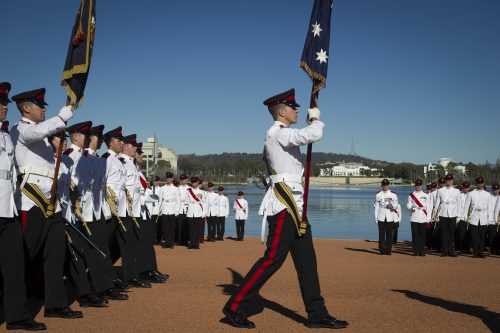 THE Duntroon Corps of Staff Cadets, together with the Band of the Royal Military College, will be Trooping the Queen’s Colour in honour of Queen Elizabeth at Gallipoli Reach on the foreshore of Lake Burley Griffin on June 6.

This traditional ceremonial parade, which celebrates the official birthday of the Queen, will take place at 10.15am on Saturday 6 June 2015 and will be reviewed by Governor-General Sir Peter Cosgrove.

The public of Canberra are warmly invited to attend. There is no charge for admission. It is advisable to bring along a folding chair, and perhaps a warm blanket, to enjoy this picturesque military ceremonies.

Refreshments will be available and facilities provided.

The “Trooping the Colour” ceremony dates back to the 16th Century when, each evening, the Regiment’s Colour was escorted through the ranks of troops to ensure that soldiers would be able to recognise their Colour on the battlefield. In the mid 1700’s the formality was incorporated into regular guard mounting procedures by the Foot Guards of the British Army.

The Commandant, Staff and Cadets of the Royal Military College of Australia are particularly proud of the customs and traditions contained within the ceremony and welcome the opportunity to display the skills involved in portraying the pageant in the beautiful surrounds of Canberra’s lake.