AN OPERA like “Turandot” is not called ‘grand’ for nothing, with an obligatory element of spectacle that at time looks odd when crammed into the small stage of the Sydney Opera House’s opera theatre. 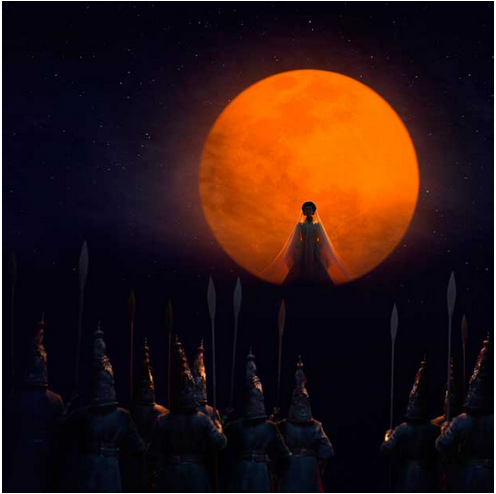 With lavishly-costumed mythic figures on towers, a floating moon and mask and lavish costumes by Kristian Fredrikson that run the gamut of faux-Tartar to delicate scarf-like evocations of Chinese painting, this Turandot hits the eyes even before the ears.

With the added advantage of having been directed, or more accurately choreographed, by Graeme Murphy, this is a show that moves and sways with the waves of emotion portrayed through Puccini’s intentionally exotic music.

This interpretation of the opera was originally staged for OA in 1990 and has stood the test of time, coming up fresh as a daisy and drawing thunderous shouts from the audience, primarily for the vigorous performance of Korean tenor Yonghoon Lee in the part of the exiled prince Calaf, whose libido is challenged by the icy Turandot.

In marked contrast to OA’s other orientalist extravaganza, Moffatt Oxenbould’s kabuki-style “Madama Butterfly,” this mighty showcase of song and spectacle is well worth keeping in the repertoire as the cat-that-swallowed-the-cream smile on OA director Lyndon Terracini’s face on opening night suggested.

In Butterfly, Puccini created a character of exquisite sensibility, but in Turandot he found himself with a legendary figure, a frigid ice maiden prepared to destroy a kingdom to retain her virginity on the pretext of standing up for an ancient forbear.

And indeed it is well-known that the composer struggled getting the story to work dramatically, splendid though it may have seemed as the basis for a large-scale work. His introduction of the subplot concerning the tragic serving girl Liu, who sacrifices herself for a smile, is the main thing going for “Turandot” dramatically. It is a sad irony that Puccini died when she died, leaving the inextricable problem of getting the ice-maiden down off her tower and into the arms of Calaf to Franco Alfano, who made his first attempt at finishing the opera in 1926, two years after Puccini’s death.

Having said this, the cast and the magnificent Opera Australia chorus, augmented by a children’s chorus that ameliorates the savagery, puts up a heroic fight with this operatic warhorse.

Calaf could be a risk, as his obsession with Turandot betrays singular stupidity, but in the hands and voice of Lee, the role takes on the quality of vigorous masculinity that would not have been possible with a lighter tenor. This Calaf is a hero and his glorious voice affirms this throughout. To him went the applause for the biggest set-number, but the expected “Nessu Dorma” still surprised, delivered hauntingly in a swirl of stage mist that enveloped the audience in the stalls.

Anyone playing Turandot is challenged by having to soften suddenly into Calaf’s embraces, all the more difficult by the fact that Puccini was already dead by the time the last scenes were written. Lise Lindstrom’s menacing Act II aria “In questa reggia” where she she relates the background to her deathly riddles which have doomed many young suitors to execution, is delivered with a knife-like power, but her transformation into suppliant maiden is quite unconvincing.

Graham Murphy is at his most comfortable staging brilliant scenes like the initial homage to the Emperor, even taller than Turandot but performed by Benjamin Rasheed as a man frail and exhausted by the bloodshed in his kingdom.

There are is not a lot of fun in “Turandot”, but what there is comes from the three courtiers Ping (Luke Gabbedy), Pong (John Longmuir) and Pang (Graeme McFarlane), who act as a conduit to the audience as they dream of escaping to the provinces far away from the bloody toll taken by the princess’s frigidity and the hierarchy of traditional Chinese custom. No wonder this opera was unsung in the People’s Republic until the Zhang Yimou/Zubin Mehta production in 1998 – it places ancient Chinese values in a disturbing light.

But in this imposing production for OA, with music more often harsh and jarring than sweet and gentle, just as Puccini intended it, there is one brilliant ray of humanity. That is entirely in the hands of Hyeseoung Kwon as Liu and Jud Arthur as the blind exiled king Timur, Calaf’s father. Liu’s response to Turandot, “Tu che di gel sei cinta,” close-ups equipped at death, and the blind king’s realisation that she has gone, brought the house to a shocked standstill.