EMILY Bitto’s ‘Stella’ prize-winning debut novel, “The Strays,” has been announced today as the 2016 University of Canberra Book of the Year.

The manuscript of the lauded novel was shortlisted for the 2013 Victorian Premier’s Literary Award for an Unpublished Manuscript, for the 2015 Indie Prize and the 2015 Dobbie Award. published in 2014, it then went on to win the $50,000 Stella Prize in 2015, presented for the best work of literature, fiction or nonfiction, published in 2015 by an Australian woman.

Unusually, the UC Book Project, which was introduced in 2013, provides a novel to all commencing students and staff at the university – encouraging students to engage with each other irrespective of their course or background and inspiring staff to draw on the book’s themes within their curriculum. It also serves to give additional weight to the Stella, since the guaranteed book sales guaranteed by the UC award, confirm success already achieved. 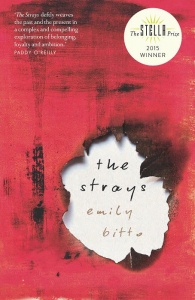 “The Strays” is a tale of friendship, belonging, family, loyalty and ambition set in the Melbourne art scene of the 1930s and Bitto described herself as ‘elated’ that the book had been chosen by judges Marion Halligan, Jen Webb, Mallory Bugeja, Helen Taylor and Deputy Vice-Chancellor (Education) Professor Nick Klomp, who envisaged the UC Book Project.

“Reading and discussing books with other people, whether through my undergraduate studies in literature, through book clubs, or now as a writer myself, has always been a great passion of mine, and I couldn’t be happier that my book will become the basis for discussions across the whole university community,” said Bitto, who has a Masters in literary studies and a PhD in creative writing, said.

“We are delighted to be giving this book to all commencing students and staff, and we hope it triggers interesting discussions throughout the year,” Professor Klomp said, “the UC Book Project is an Australian first which offers another point of difference for students who choose to study at the University of Canberra.”

Former winners of the UC Book of the Year include “Jasper Jones” by Craig Silvey, “Room” by Emma Donoghue and “The Rosie Project” by Graham Simsion.

Review - May 17, 2021
0
There was virtually a full house of music lovers at the Q Theatre for “Fate”, the National Capital Orchestra’s Sunday afternoon concert, writes reviewer LEN POWER.