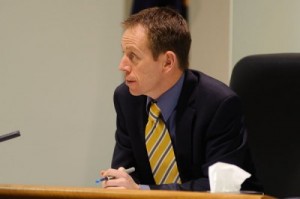 SHANE Rattenbury has launched the next phase of community consultation to improve infrastructure in Weston and Ainslie as part of works to make them Canberra’s first age?friendly suburbs.

“The ACT Government has been working with Council on the Ageing (COTA) to make Weston and Ainslie Canberra’s first age-friendly suburbs by improving infrastructure and facilities to make it easier for older residents to get around,” Shane said.

“These suburbs were chosen to be the first in Canberra based on their demographic profile and differences in their urban environment, with Kaleen and Monash next on the list.

“An initial audit was undertaken in late 2014 and consultation was undertaken by COTA in early 2015. The key findings identified issues such as narrow and incomplete path segments, non-compliant wheelchair ramps, few places to rest and reduced visibility due to overhanging vegetation.

More information and an online survey are available at timetotalk.act.gov.au. Hardcopy surveys are also available at the Civic, Dickson, Woden and Tuggeranong public libraries and will be mailed out to residents of Ainslie and Weston. Alternatively come along to a drop?in session at the Weston Creek Community Centre on Monday 12 October or the All Saints Anglican Church Community Hall in Ainslie on Tuesday 13 October. These drop?in sessions will run from 4.30 pm to 6.30 pm, with a formal presentation at 5.30 pm.

CityNews - February 25, 2021
0
Travellers returning to the ACT from New Zealand may be required to seek entry approvals.