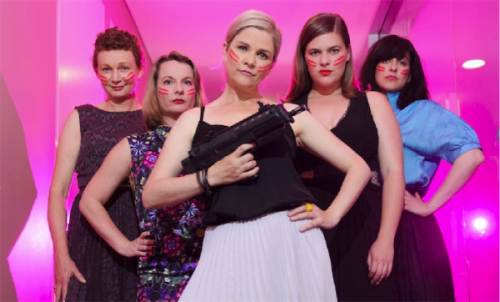 IN a meandering hybrid between a TED Talk and a moved reading, writer David Finnigan explored his frustration over the reception of his controversial play “Kill Climate Deniers” before performing the climax of the work to a house music soundtrack.

At first, I thought this was a self-referential meta-piece, but this is a real play with a controversial history, and Finnigan’s anger is genuine.

Determined to tell, not show, he explained in detail the influences and outrages that shaped his work. He also frequently made deliberately absurd digressions into the history of electronic house music, perhaps to show that his feelings are so strong they can only be expressed in absurdism.

After an extensive preamble, Finnigan slipped into a moved reading, playing the characters himself. In the play, a horde of lefty eco-terrorists storm Parliament House and take hostages before being cut down by the environment minister, who goes on a Rambo-like rampage.

The play was a satire of over-the-top action movies, with climate change a red herring: the play’s real preoccupation is the use of violence to force political change, which it condemns regardless of the justice of the cause.

There were some funny moments, such as when an audience member was handed a script and asked to read a monologue by “Fleetwood Mac”, with Finnigan explaining that he had no idea, whether that was the name of a band or a person, or in fact what kind of instruments they may or may not have. A video of Finnigan’s father – an actual climate scientist – floundering during media training was also a funny and clever way of illustrating the challenges faced by scientists who now also have to be media experts.

Finnigan is justly outraged by the smears, propaganda and political attacks his work has received, with few commentators willing to look past the play’s provocative title. But it also true that by choosing that title he was deliberately courting controversy.

For someone coming to the story for the first time, this seemed to be a disjointed one man show, with any potential advocacy for climate change action lost in the author’s self-martyrdom.