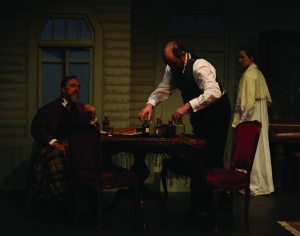 A CHEKHOV play is synonymous with that uniquely Russian bleakness and futility, despite the playwright’s insistence that his works are comedies, not tragedies.

However despite an involving opening the play lapses into grimness, with the sprightliness of the male leads highlighting missed opportunities for comedy.

The vitality of the play is also drained by dull blocking which often leaves actors stranded on stage waiting for the cue to deliver their next line.

However the play has a lot of resonance for a modern audience, with the ecology-minded Dr. Astrov’s lament on the short-sighted hacking away of woodlands a clear parallel with contemporary foot-dragging on climate change.

There is much heavy-handed sermonising in the script about how life is mostly pointless suffering, but the real message of play is that our actions matter, and as Dickens wrote ‘No space of regret can make amends for one life’s opportunity misused’.

Uncle Vanya’s tragedy is not that his life has been wasted, but that he does not see how much more he can still do.

Barber Steve only offers the best