LAND Development Agency CEO David Dawes says the purchase of the 104.17 hectare Wintergarden Estate in Belconnen will allow the territory to retain the area as an open space buffer while best realising development in the adjacent suburbs of Molonglo.

“The package of blocks 1491, 1492 and 1587 District of Belconnen was bought by the ACT Government this week following the estate being offered at auction earlier this month,” David said.

“The ACT Government intends to continue the current rural use of the land, which is adjacent to the suburbs of Cook and Weetangera, while also allowing for the provision of important infrastructure and services for Belconnen and the Molonglo Valley. It will not be used for residential development and will be retained under its current zoning as hills, ridges and buffer land between the districts of Belconnen and Molonglo.

“The previous owners will continue to stay on the property for the next 10 years and will maintain the property in its current state. However, the government will be able to take control of non-residential parts of the property as required during that time.

“As a long-term strategic purchase there are no immediate plans for the property but through this purchase the government has secured land necessary for important infrastructure works that will be associated with Molonglo Stage 3.

“These works include a bulk water supply main, the repositioning of 132kV powerlines from Molonglo 3 to across William Hovell Drive and a significant upgrade to the intersection of William Hovell Drive with Coppins Crossing Road (to be known as John Gorton Drive) and Coulter Drive.

“The blocks purchased are classified as ‘Hills, Ridges and Buffer Spaces’ under the National Capital Plan and the government has no intention of seeking a change to its current zoning.”

Selling agent Rhys Summergreene, of Harcourts Kingston/Manuka, welcomed the government’s willingness to consider his client’s needs during the negotiations.

“We very much appreciate the territory’s consideration of our client’s long tenure on the property and that they are able to continue to manage the property for a number of years following the sale,” Mr Summergreene said.

“The property will stay as a farm and remain a buffer that can be enjoyed by Canberrans into the future.”

“After finding out Wintergarden was for sale, and considering the strategic importance of these blocks to the ACT Government, it was decided the agency would seek to buy the property,” David said.

“Community benefit was an important consideration in acquiring these blocks. In addition to facilitating the connection of infrastructure and services for Belconnen and Molonglo Valley, other potential uses for the blocks consistent with the National Capital Plan include horse agistment, community gardens, as environmental offsets and for educational or scientific research purposes.

“The government may also consider using a part of the purchased land for broader recreational pursuits that would service both Molonglo and West Belconnen. Location of equestrian or playing fields on this land could service both the Belconnen and Molonglo communities over the coming years.” 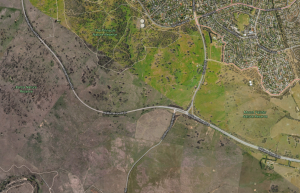