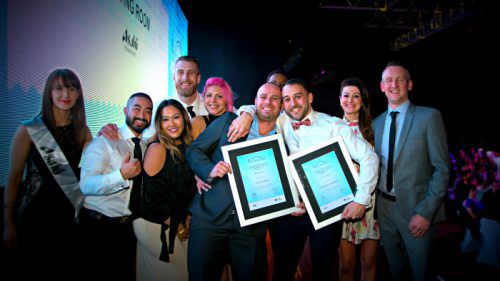 AHA ACT General Manager Jo Broad said that following a record number of entries in the Awards, more than 440 industry, political and hospitality leaders attended the black-tie event to honour the outstanding achievements of ACT hospitality businesses and employees.

“From a popular established Manuka gastro-bar to a unique, five-star hotel and a world-class wildlife retreat, this year’s winners showcased innovation and progression across the ACT’s hospitality sector.

“The hotel, hospitality and tourism sector is vital to the ACT’s economy and it will become even more so when we see the introduction of international flights in September.

“Competition was incredibly tough this year, particularly given the sheer number of entries, which indicates how much the industry has grown and developed over the last few years.

“Two major awards were also given to talented industry leaders:  AHA ACT’s John Press Award was won by Brian Smith from Hopscotch and Young & Frisky while Tarn Morrow from QT Canberra was crowned 2016 Member of the Year.

“AHA ACT sincerely thanked all key sponsors and event partners including the NCC for their generous support and making the 2016 Awards night such a memorable success,” Ms Jo Broad said.

See below for the full list of 2016 AHA ACT Hospitality Award winners:

CityNews - April 19, 2021
0
A man allegedly assaulted one woman and acted indecently without consent towards another woman in Gungahlin in April.