ACT Policing, through information provided by the public, has identified five male offenders responsible for the aggravated burglary of the Bolt Bar in Aranda earlier this month (February 8).

Around 2.38am, police responded to a call regarding an aggravated burglary occurring at the Bolt Bar. Five offenders had blocked off the carpark and were filling the boot of a vehicle with a large quantity of alcohol from the location.

Following a foot pursuit by police, one offender was apprehended at the time and the vehicle was located.

“Thanks to public assistance via Crime Stoppers, all offenders have now been identified and four of the five offenders will face court at a later date,” Acting Officer in Charge of Belconnen, Station Sergeant Allison Williams said.

“It’s another strong reminder to the public of how vigilance and awareness about suspicious persons or behaviour, and reporting it in a timely manner to police, can result in a positive outcome for our community.” 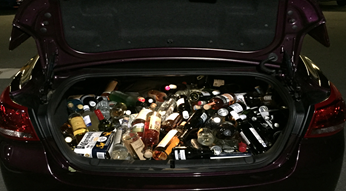 Review - May 21, 2020
0
Elliot wanted to capture these disturbing emotions and move them from her mind onto their work, writes MEREDITH HINCHLIFFE about Benjamin Edols and Kathy Elliott's online exhibition.