EVEN as a 10-year-old, Canberra-born author Anna Snoekstra’s desire to become a professional writer was as clear to her then as it is today.

“I was recently in Canberra helping mum go through some old boxes in the shed and found my autobiography that I wrote as a 10-year-old,” says Snoekstra, who grew up in Farrer.

“I wrote I was going to be a teacher and once I retired I would be a full-time writer – I was always quite realistic about wanting it.”

Now 28, Snoekstra’s debut novel is about to be released. The film rights to her psychological thriller, “Only Daughter” were sold to Universal Pictures and Working Title films. Its script has just been completed by respected screenwriter Erin Cressida Wilson – who also wrote the scripts for “Secretary” starring Maggie Gyllenhaal and the more recent film “The Girl on the Train”, based on the novel written by Paula Hawkins. 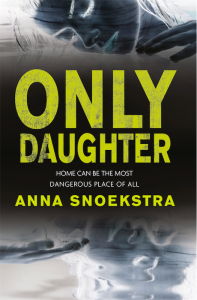 After reading “Only Daughter”, it’s easy to visualise the story on the big screen.

Set in Canberra, the book follows the disappearance of 16-year-old Rebecca Winter and 11 years later, the imposter who claims to be the missing teen.

It’s the fruition of years of hard work for Snoekstra, who moved to Melbourne as a 17-year-old to attend the University of Melbourne to study Creative Writing and Cinema followed by a post-graduate degree in screenwriting at RMIT.

“When I was 17 years old I thought I could do what I wanted to do and didn’t think about serious job prospects down the line,” she says.

“After I did my post grad in screenwriting, I started applying for all sorts of things and was not getting anywhere.”

Snoekstra found herself working in a cinema at night and spending her days working on her writing.

“Every time I got rejected it made me more motivated about sending my writing out,” she says.

She says when the idea behind “Only Daughter” started forming, it never came into her head that it would never reach the page.

“It was definitely a light-bulb moment,” she says. “One night I couldn’t sleep. I had this vague idea and by the morning I had the story idea and the characters…

“It kept being in my head and I wasn’t getting anywhere with finding a job so I just decided to write it.”

Snoekstra said Canberra was the “perfect fit” for the setting for her chilling story.

“During the day, Canberra has this beautiful, safe, suburban feel,” she says. “At nighttime you can see how far apart everything really is, the lighting is not so great. You could be walking across a big oval and it will be totally empty.”

She says that Wilson’s film script has set the story in Arizona in the US.

Anna has been to LA twice since the rights of her novel were sold to Universal Pictures, meeting up with executives from some of the biggest film studios in the world, including Universal Pictures, Sony, Fox and Chernin Entertainment, who just wanted to learn more about her.

“It was kind of this weird mixture of very intimidating and also so surreal it was funny,” she says.

“It just got to this point where I walked into Universal and they have this massive Universal Pictures in this big gold lettering and every film that I’ve loved – their pictures are on the wall because they’ve made it – you just almost have to laugh because it’s just next level.

“Publishing happens so, so slowly, and film stuff just happens insanely quickly. So when the film agent called me and said he was interested, within two weeks, he’d done the deal.”

Since signing her book deal, Snoekstra has continued to write, already penning her next novel “Dolls” set for release next year as well as dabbling in young adult fiction and picture books.

She’ll also be a guest co-producer on a new podcast called “Dead and Buried” – an exploration of historical true crimes in Melbourne.

She’s now focused on the book release of “Only Daughter” and looks forward to coming back to Canberra for the Canberra Writers Festival, where she’ll be launching the book to her home town.

“It’s going to be amazing when it actually comes out, all this stuff has happened, which is so exciting and amazing but at the same time [“Only Daughter”] hasn’t actually been out there for the public to read and that’s what actually really counts – what people think about it,” she says.

Anna Snoekstra (visit annasnoekstra.com) will launch “Only Daughter” at the National Museum of Australia during the Canberra Writers Festival on Saturday, August 27 at 10am. Visit canberrawritersfestival.com.au/