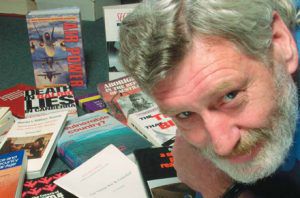 ACTING ANU Vice-Chancellor Professor Marnie Hughes-Warrington says the university is saddened by the death of Professor Desmond Ball AO, who was one of Australia’s most influential and respected defence and strategic policy experts.

“Professor Ball was the leading figure in Strategic Studies in Australia of his generation, and made a major contribution to global scholarship in a field of vital importance,” Marnie said.

She said he was one of Australia’s foremost public intellectuals, and exemplified the way scholars can and should contribute to national policy debates. Over many decades he was a major voice on questions of defence policy, nuclear strategy, intelligence and Asia-Pacific security.

“In over 40 years with us, starting as an undergraduate student in the 1960s, he made an absolutely remarkable contribution to the University as a scholar, teacher, academic leader and mentor,” Marnie said.
“His analysis during the Cold War of US nuclear defence plans mean he will forever be remembered as the man that helped save the world.

“Our thoughts and condolences are with his family, especially wife Annabelle, and children Katie, Matthew and James.”

During the Cold War, Professor Ball advised US President Jimmy Carter against nuclear strikes against Soviet targets. At the time, President Carter wrote that ‘Desmond Ball’s counsel and cautionary advice, based on deep research, made a great difference to our collective goal of avoiding nuclear war’.

Professor Ball also publicly revealed the development of the Pine Gap US base in the Northern Territory, leading him to be classified as a ‘person of interest’ in 1966.

He wrote or edited more than 60 books and monographs, the most recent of which was released in the past week.

His achievements were recognised in 2013 with the Peter Baume Award, and in 2014 when he was appointed an Officer of the Order of Australia (AO).

“He was an internationally acknowledged giant in his chosen field of Strategic Studies,” Professor Wesley said.

“His research and teaching were characterised by exhaustive field-based study; motivated by a deep passion and concern for human wellbeing and justice; and always of pressing relevance to policymakers and scholars alike.

“Perhaps most importantly, Des was a generous and encouraging colleague, whose legacy is reflected in the thousands of people whose lives he touched and influenced through his teaching, writing and mentorship.”

“Des was a generous and wise collaborator who devoted his entire career to supporting ANU research and teaching programs,” Dr Farrelly said.

“Those of us who worked closely with Des have lost a tremendous mentor and inspiration. His decades of energetic service were in the best tradition of the University.”

Dr John Blaxland, from the ANU Strategic and Defence Studies Centre, said while Professor Ball’s work was at times controversial, it was always important.

“His work pushed the bounds of what was considered appropriate by the bureaucracy but his work proved important in informing and shaping the national debate about the American alliance and intelligence architecture in general.

“Insiders, while squawking at times about what he wrote, never failed to follow closely what he had to say.”