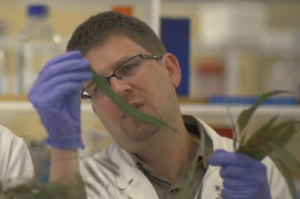 Dr Carsten Kulheim, a lead researcher in an international study published in Trends in Biotechnology, said renewable fuels that could power commercial aeroplanes were limited and expensive but a solution could be growing all around us.

“If we could plant 20 million hectares of eucalyptus species worldwide, which is currently the same amount that is planted for pulp and paper, we would be able to produce enough jet fuel for five per cent of the aviation industry,” Carsten said.

“The aviation sector globally produces about two per cent of all human-caused carbon dioxide emissions.

“Eucalyptus-based fuel would initially be more expensive than fossil fuels to make on a mass scale, but would produce significantly less net carbon emissions.

“Powering a modern jet aircraft with anything other than fossil fuels was difficult, due to the high energy required.

“Renewable ethanol and biodiesel might be okay for the family SUV, but they just don’t have a high enough energy density to be used in the aviation industry.

“Eucalyptus oils contains compounds called monoterpenes that can be converted into a very high energy fuel, and this high energy fuel can actually fly jets and even tactical missiles.”

“It has minimal ecological impact,” he said.

“We can plant these trees on marginal lands that have low rainfall, and we can also plant them in agricultural systems that have salinity problems and help them defeat that problem.”

ANU conducted the study in collaboration with Oak Ridge National Laboratory, University of Tennessee and University of Florida in the United States.

Belinda Strahorn - May 13, 2021
0
A majority of the recommendations made by an independent review into the workplace culture of Canberra's public health services have been ignored, said shadow health minister Giulia Jones.