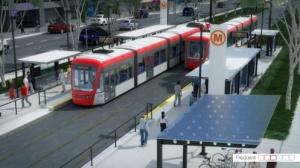 A leading economist from The Australian National University (ANU) has warned that the economic benefits of major infrastructure projects are being overestimated and could lead to the construction of white elephants.

“The Canberra light rail project is a very good example with 20 per cent of the benefits attributed to wider economic impacts,” Leo said.

Professor Dobes said WEIs are made up of three factors, all of which may be misleading when applied to Capital Metro. One of these factors is an increase in tax revenue.

“You can’t claim that taxes such as GST and income tax are a benefit to Canberra because they’re collected by the Federal Government and don’t necessarily come back to the ACT,” he said.

“The other problem is that if an infrastructure project is large enough to create an increase in employment and production, it’s also costly. You’re going to have to increase taxes to pay for it.”

Another factor of WEIs suggests that if more people can travel faster and cheaper, some industries will increase their production of goods and services because they have access to lower cost workers.

“They’re choosing one economic theory to say that production will increase, but there are other theories that say that it won’t,” he said.

“They’re being selective about which theory to apply.”

The third claimed WEI is an agglomeration, or accumulation, effect as more workers travel into Civic by tram and increase productivity because they swap ideas and knowledge.

“The strength of this effect for a Gungahlin tram to Civic is open to question,” Professor Dobes said.

The full academic paper has been published in the latest Agenda Journal of Policy Analysis and Reform.

Review - May 15, 2021
0
Reviewer ROB KENNEDY revels in a concert where every player gets to shine.