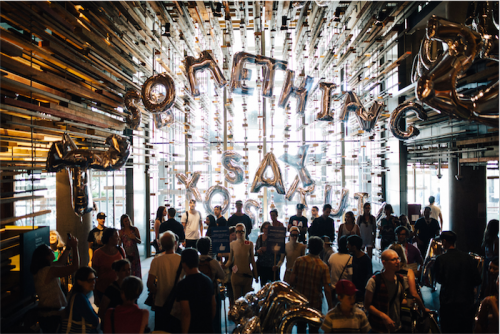 AS Canberra, slips into its most beautiful season, one wonders if it ought to be tagged "City of Festivals", for there’s no sign of special events abating with "Noted" and "Art not Apart" coming up.

Both these festivals involve young people working at the cutting edge and in the community.

"Art not Apart" is a one-day contemporary arts festival focusing on one of Canberra’s newest urban settings, the New Acton precinct, Westside shipping container village and parts of Lake Burley Griffin, exposing its potential to be a hub of almost frenzied arts activities that give “light to the lesser heard, lesser seen”.

Last year we were treated to “beautiful and crazy experiences” – a beach party on the Acton foreshore, floating letters in the foyer of Hotel Hotel and a whirlwind tour of the arty New Acton walkways.

According to Liu, the idea is simple: “This is art, no-one’s apart”.

"Noted", in marked contrast, is a writers’ summit now in its second year, aimed largely at young people and writers lead the way.

Run in loose partnership with April’s You Are Here Festival, last year it  hosted and paid more than 60 emerging and experimental writers, editors, publishers and artists. This year they’re predicting more than 100 artists in workshops, panels, art exhibitions and live events for kids and adults.

Kicking off on March 15 with Oscar Capezio’s exhibition “Cold Like Concrete”, Australian art/text spanning 40 years, it packs the following five days with initiatives such as “Snap Stories”; “Heroes”, where “Koori Kids” write about their heroes; “Bill Poetries” where Andrew Galan and a bunch of other poets post their words up all over Canberra's nooks and crannies; The Anything Is Valid Dance Theatre collaboration between Serena Chalker and Quindell Orton and “Boring Bits”, online mini-lectures.

It sounds anything but boring.

Art not Apart, March 19; full program at artnotapart.com and Noted, around Canberra, March 15-20, details at notedfestival.com