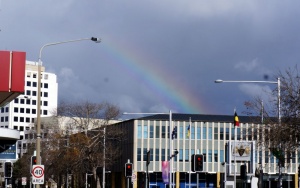 “Mr Smyth’s record of service to the ACT, including 18 years in the ACT Legislative Assembly and a year in the Federal Parliament, means he is eminently qualified for the new role,” Andrew said.

“His senior ministerial experience and a track record of representing the capital overseas, including being part of establishing Canberra’s sister city relationship with Beijing, will be directly relevant to the commissioner’s role in maintaining our relationships with key international cities. This is particularly important as we look to capitalise on direct flights to Singapore and Wellington.

“The commissioner will get to work immediately on finalising the strategy governing Canberra’s international engagement. This international plan will focus our efforts to build enduring international relationships, supporting jobs and cultural exchange.

“No city of 400,000 people ever prospered by selling to itself. The future prosperity of the ACT relies on our success in developing our export markets overseas and attracting international investment.

“Canberra companies have already achieved a great deal and our export story is a positive one, but there is much more work still to do and with international flights about to take off, now is the perfect time to fill this important role and focus our international activity.

“In this role, I’ve no doubt Mr Smyth will add greatly to the government’s ability to ensure Canberra’s economic, social and cultural exchanges with our friends overseas produce real and lasting benefits for our city and our region.

“Mr Smyth will formally start in the role on Monday 1 August.

“The ACT Government has worked hard on international engagement over the past three years. This has led to a rapid increase in exports, growth in the ACT’s tertiary education sector, increased foreign investment and more in international visitors to Canberra.

“The commissioner will work with Canberra’s education and research institutions to promote Canberra as an education and investment destination.”

UPDATE: Brendan has had this to say:

After 21 years of public service and 18 years in the Legislative Assembly, I today announce my resignation as an MLA.

I wish to thank the people of Brindabella for their support over the years and the trust they’ve placed in me to represent them. Thank you for that honour.

I thank my colleagues; it has been an honour and a pleasure to be a member of the Liberal Party room over the past 18 years.

I have accepted a role as the new Commissioner for International Engagement for the ACT.

To my wife Robyn, daughters Amy and Lorena and son David I say thank you for everything you have done for me.

UPDATE: Jeremy Hanson has had kind words to say about this development:

“First elected to the Federal House of Representatives in 1995 at a by-election, Brendan served in the Federal Parliament before being elected to the ACT Legislative Assembly in 1998. He’s since had a distinguished career in the Assembly, including several years as Leader of the Canberra Liberals,” Mr Hanson said.

“I speak for the whole Canberra Liberals team in wishing Brendan Smyth all the best his future role as Commissioner for International Engagement. Brendan has a true passion for Canberra and his enthusiasm will be put to good use.

“Congratulations Brendan and thank you for your for you service to Canberra. We all look forward to it continuing for years to come,” Mr Hanson concluded.

UPDATE: The name of the candidate elected to replace Mr Brendan Smyth MLA in the ACT Legislative Assembly should be known by 28 July 2016, the ACT Electoral Commissioner Phillip Green says.