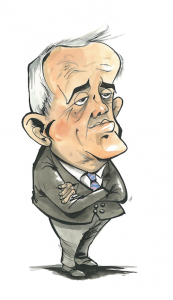 MALCOLM Turnbull has just announced that the budget will be brought forward to May 3, paving the way for a possible double dissolution early election.

If the Senate refuses to pass the ABCC legislation the Prime Minister says the election will be held on July 2.

As part of this process the Parliament is being recalled on April 18 for an additional three weeks of sittings.

More on this as it comes to hand.

UPDATE: From the USA the House of Cards Twitter feed has approved this move:

.@TurnbullMalcolm I admire your methodology, Prime Minister. If you don't like how the table is set, turn over the table.

UPDATE: The Prime Minister’s comments are now available in full but this is the key passage:

Today, I called upon His Excellency the Governor General to advise him to recall both Houses of Parliament on April 18 to consider and pass the Australian Building and Construction Commission Bills and the Registered Organisations Bill and he has made a proclamation to that effect.

I make no apology for interrupting Senators’ seven week break to bring them back to deal with this legislation.

This is an opportunity for the Senate to do its job of legislating rather than filibustering – the go-slows and obstruction by Labor and the Greens on this key legislation must end.

The Senate will have an additional three sitting weeks to deal with the ABCC and Registered Organisations legislation – plenty of time to pass these important laws.

If the Senate fails to pass these laws, I will advise the Governor General to dissolve both Houses of Parliament and issue writs for an election.

Because such a double dissolution must be done on or before the 11th of May, the Government will be bringing the Budget forward to Tuesday 3rd of May so that Mr Shorten will be able to deliver his reply on the Thursday in the usual way.