JEREMY Hanson and wife Fleur turned up for an hour of good-humoured domestic interrogation on 2CC’s “CityNews Sunday Roast” program during which the amiable ACT Opposition Leader confessed to doing the family’s ironing – not just that easy flat stuff of shirts, but also Fleur’s “frilly bits”.

He also admitted to not being great shakes in the kitchen but, around the house and garden, diligently follows his wife’s direction, often via texted to-do lists.

Does he take his wife’s advice about political issues, too? Not always, he said. But there were times he wished he had, crediting public servant Fleur with keeping him “grounded”.

GAI Brodtmann’s electorate of Canberra, which skirts a little north of the lake and all the south of the city, would appear to be a happier place than Andrew Leigh’s comparatively downcast northern safe seat of Fenner (nee Fraser).

That’s according to this week’s Australian Unity Wellbeing Index survey, which has examined life satisfaction across all 150 Federal seats ahead of the upcoming election.

Nationally, Mayo in the Adelaide Hills is the happiest kingdom of them all and Blaxland in Sydney’s west the glummest in the nation.

The seat of Canberra rated 17th and Fenner at heel-dragging 70th, where one can but hope the prospect of a northbound tram line will lift their ungrateful spirits.

The survey evaluates satisfaction with life across areas such as standard of living, health, achievement, personal relationships, safety, community connection and future security.

… but not with ‘Murrumbidgee’ Mick

HERE’S a glimpse of perhaps why “local” (and vulnerable) Brindabella member and Planning Minister Mick Gentleman is suddenly rethinking his trumpeted housing development plans on the Murrumbidgee River Corridor.

In an election year, the little people are rising up. There’s an email being circulated by the South East Tuggeranong Residents Association on behalf of its author Narrelle Kelly, who quite simply writes: “We are a bunch of average people. We are bird watchers, archery enthusiasts, property owners, mountain bikers and fisher folk. We are regular people fighting to keep something wonderful.

“What we have in common is that the Murrumbidgee River Corridor will be gone once Mick Gentleman, the ACT Minister for Planning, has his way and the proposed new suburb of Thompson is developed.

“It is a beautiful place that has at least six endangered species, lots of wildlife and as I use it, a lovely quiet place to sit and read a book by the river. But Mick Gentleman would happily see this area have 3500 housing ‘opportunities’.” Ouch!

Narrelle’s “average people” are organising a petition to place before the ACT Assembly. More from her on 0439 491997.

Master Builders’ CEO Kirk Coningham wasn’t holding back in a pre-ACT Budget grumble: “Will Canberra’s builders, civil contractors and subcontractors have the opportunity to grow their business in their home town? Or will they spend each morning driving past reminders of our government’s dodgy deals with their union friends, on their way to build affordable quality homes in Googong, Murrumbateman, and beyond?”

Truffles go to the dogs

THE eighth Canberra Region Truffle Festival has 250 truffle-related events planned for the Canberra district all the way to August.

The season gets underway on Sunday, June 19, with an invitation-only “Blessing of the Truffle Dogs” by an Anglican congregation from the Goulburn Mulwaree Parish.

Supported by the Goulburn Mulwaree Council, the event at Tarago Truffles will see specially-trained truffle hunting dogs from around the region gather at Tarago to be blessed and mark the start of the truffle season. 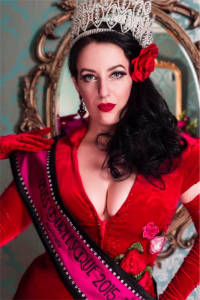 THE reigning Miss Burlesque Australia, Bella de Jac, pictured, will be in Canberra for a cabaret performance at The Abbey on July 16. Apparently, Australia’s Mistress of Tease is “a darkly elegant whisper from the nihilistic 1930s, insidious and sensual”. She has performed in Las Vegas, New York and San Francisco and doubles as managing director of the Australian Burlesque Museum.