WHAT were the statistical chances… ACT numberplates 727 and 747 innocently parked beside each other? Our sharp-eyed inner-south snout snapped the duo and surrendered the photo to CC via an email titled “Seen at the airport”. We reckon the location’s too good to be true, but a good get wherever it was taken.

We cross now to the S-bend…

TOO much information, bemoans a breakfast-radio snout after ABC 666’s morning host Genevieve Jacobs’ digestive revelation to breakfast host Phil Clark during their usual 7.35am chit-chat (on Monday, July 15).

Discussing the results of a new health survey on eating red meat, Ms Jacobs confessed that a high-quality Wagyu beef steak she once consumed took her “several days to process”. Yep, from dinner plate to S-bend, several days.

“Just the information you need to hear over your breakfast muesli,” our snout snorted.

Potholes we have known 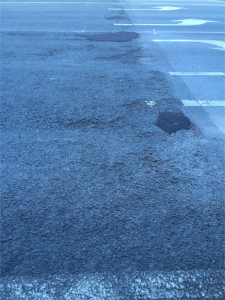 ANOTHER in our series of Great Potholes of Canberra. This week we visit the off ramp from Gungahlin Drive as it turns right on to Belconnen Way.

Marvel at the way the gravelly repavementing masterfully fails to join up with the established surface and the hapless patching of some of the consequent potholes. Apart from the safety issue of drivers sliding dangerously towards the lights, does no one from City Services check the quality of this, presumably, sub-contracted work?

If you have a pet pothole that’s being neglected by the bureaucracy, email a photo or its location to cc@citynews.com.au

The member for confusion

SUCH is the lot of local member; shadow assistant treasurer Andrew Leigh will be at the opening of a budget hairdressing salon at Majura Park next month. The excitable crimpers wrongly describe the member for Fenner as the “member for Fraser”, the name of his north Canberra electorate that lapsed at last month’s election. Who’s to blame? The chain’s Sydney-based marketing when upbraided for this slight blamed “Minister” Leigh’s website. And lo, there it was… Andrew’s welcoming note as the member for Fraser and a click away, at “About Our Electorate”, is a long and illustrated history of the now defunct seat of Fraser.

KILLJOY chiropractor Kathy Knight, of Chifley, wags a warning finger at those obsessed by the phenomenally popular reality game “Pokémon Go” in her latest patient newsletter.

“Walking with your head down and staring at your phone may be good for catching Pokémon, but it’s terrible for your spine!” she says.

Why? When a 5.5kg head is tilted forward, it “causes a ton of strain on your neck – just a 15-degree tilt causes its weight to double,” says Kathy. “To combat text neck, raise your device to eye level to allow for better support of your head.”

COLUMNIST John Griffiths managed to raise the ire of many polite, mature readers with his recent, gentle gerontophobic tickle titled “Why are old people so damn rude?”

While he continues to take a pasting from letter writers, CC couldn’t resist this marvellous riposte from reader Mr M McGregor, of Curtin, who writes:

Why are 43-year-olds so damn grumpy?

So many possibilities, John:

Yes, John, we can fully understand your problem. Seek help.