LOCAL eight-ball champ Steve Woods is one of the Australian team to pocket the World 8ball Pool Championships for the first time in 20 years after three weeks competing in Blackpool, UK.

He also earned personal recognition by being selected as a member of the Men’s World Team.

Steve grew up playing 8ball and snooker in Canberra, and has been competing in state titles and Australian championships since 1998.  He has been the runner-up Australian Champion multiple times and consistently achieved high rankings, including being ranked in the top two in Australia for the last six years.

These results have earned Woods a place on the Australian team 11 times.

Winning the World Championship had apparently been an ongoing dream of the Australian Men’s Team after their coaches, mentors and fathers won the title 20 years ago.

Since then, the competition had been dominated by the English, who were excluded from the final only twice in 20 years. But this year Australia defeated England in a nail-biting 8-7 semi-final before taking the title against Ireland 8-6.

“LADY Cosgrove tackled by trouserless polar bear as Governor-General looks on laughing!” Oh, the headlines we’d love to write. Sharp-eyed snapper Andrew Finch spotted this cross-cultural clinch as Sir Peter’s wife was drawn into a (polar) bear hug at the Canadian High Commission’s reception for its recent national day. There was a Mountie there, too, but Finchy didn’t hang about to see what he got up to. 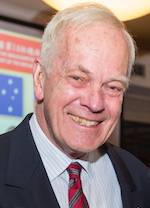 FROM a gong to a building, there seems to be no end of salutation for retiring ANU professor, the brilliant and thoroughly pleasant Brian Anderson, pictured.

Last month in the Queen’s Birthday awards, as one of the university’s most distinguished professors, Prof Anderson was promoted to the top honour of Companion in the Order of Australia and, this month, to salute his retirement, the ANU is renaming its hitherto gloomily titled Research School of Information Sciences and Engineering Building to the comparatively sparkling Brian Anderson Building. They’re also throwing in a knees-up to say goodbye on July 22.

And in his car he had a…

CC’s loves clever personalised numberplates and we reckon this one’s a star: EIEIO. Spotted by our Tuggeranong snout, he reckons the owner’s name has to be McDonald!

HERE’S a different way of seeing tribute acts. Author Peter “Phoebe” Freestone will be at the Harmonie German Club, Narrabundah, on September 8, to kiss-and-tell a little about living with Freddie Mercury, the outrageous lead singer of Queen, who died in 1991.

“I was Freddie’s chief cook and bottle washer, waiter, butler, secretary, cleaner and agony aunt,” says Peter. “I travelled the world with him, acted as his bodyguard when needed and in the end, of course, I was one of his nurses.”

The pair met in 1979 when Peter was working in wardrobe for London’s Royal Ballet and formed a friendship that saw him become Freddie’s personal assistant, a role he continued in until the singer’s untimely death.

Marking what would have been Mercury’s 70th birthday, Peter promises an intimate evening of personal stories, rock anecdotes, rare photos, unheard audio and an audience Q&A covering the 12 years he spent living with and working for the Queen frontman.

Tickets to “You’re My Best Friend: An Evening With Peter Freestone” via peterfreestone.com/tour

AND from the world of research, we learn that Australians are gripped by a new anxiety, “pet fret”, and owners are turning to new wearable tech devices and online pet monitoring services for peace of mind to track their pets.

The latest in pet-tech includes:

0
Reviewer DOUGAL MACDONALD says the new film "About Endlessness" is entertaining without being didactic; it’s a collection of vignettes of humans behaving in visual/aural bites that each don’t take more than about 180 seconds to illustrate on the screen.