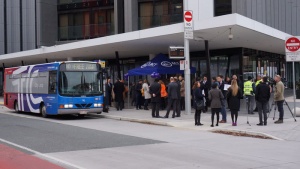 ALISTAIR Coe has proposed a “City Hopper” bus loop intended to link Canberra’s CBD with the Parliamentary Triangle and other key locations like the ANU, War Memorial and Russell Offices.

“It will travel in a clockwise direction and intersect the City twice. It will go from the City, to the War Memorial and Russell Offices, then on to Barton, Parliament House, Parkes, back over the Commonwealth Bridge via Lennox Gardens to the City, through the ANU, before heading back to the City.

“This is a far superior service to the one announced by the government last week.

“For too long, people have remarked how difficult it is to travel between our key destinations.

“In addition to being a service in its own right, the City Hopper will also connect with the Canberra Liberals’ proposed eight Rapid Services under the ‘Canberra’s Transport Future Plan’. It will seamlessly create a bus service that will connect with all parts of the City.

“If you’re going to do a City loop service, the Canberra Liberals believe it should be done right. ACT Labor’s half baked proposal demonstrates the government isn’t interested in improving bus services across town,” Mr Coe concluded.

CityNews - January 22, 2020
0
"THOSE in Canberra who don’t have a voice or, it seems, a champion have been abandoned by the Labor Party, ignored by the unions and are invisible to the Greens." JON STANHOPE points the finger at a government that he says should terrify you.