THIS COULD BE Canberra’s  answer to HG Wells’  “The War Of The Worlds,” but you’ll have to be at Smiths Alternative this  Wednesday night to find out exactly what the “Kill Climate Deniers” project  is all about when its new album is launched.

The project began life as a playscript stage play by Canberra playwright David Finnigan that got up the noses of the ACT Opposition, and now it’s a short film, a live show and an album of original music by Reuben Ingall, who describes it as “an album of dancefloor bangers mixed with dialogue from Finnigan’s original stage-play of the same name”. 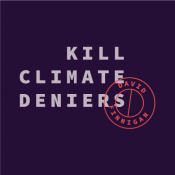 Briefly, the scenario is this: a classic rock band take the stage in Parliament House’s main hall, 96 armed eco-terrorists storm the building and take the entire government hostage, threatening to execute everyone unless Australia ends global warming.

The embattled Environment Minister has no choice but to pick up a gun and stand up for her ideals, but her weapons are weak – the best she can do its quote from Fleetwood Mac.

It doesn’t look good for the future of the nation.

CityNews - January 19, 2021
0
The rollout of the COVID-19 vaccine will begin in February and Chief Minister Andrew Barr said the government will soon share all "fine details" of how it will be rolled out in the ACT.