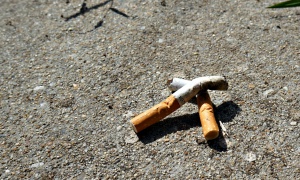 ACTION to reduce packaging and irresponsible cigarette butt disposal would improve the litter reported in the ACT, which recorded the dirtiest waterways in Australia according to the latest Clean Up Australia Rubbish Report.

Chairman and Founder of Clean Up Australia, Ian Kiernan, says Clean Up volunteers reported an average item count of 646 in ACT waterways including rivers, creeks and lakes accounting for 40% of the total rubbish reported across the Territory. This is 45.4% higher than neighbouring NSW and 47.5% higher than Victoria.

“Parks were the next most polluted site in the ACT accounting for 24% of rubbish,” Ian said.

“Packaging (cigarettes, their packets and lighters, aerosols, paint tins, boxes, laundry and cleaning products, crates, wine casks, drums, automotive oils, large paper and bags), made up 37% of rubbish counted in 2015 – the highest proportion in the country. The main culprit was cigarette butts – reflecting 32.9% of the individual item count- more than double any other state or territory. This outcome is a disgraceful result for the smokers of the ACT, especially with the closure of the local recycling program due to removal of funding by the tobacco industry.

“The litter that accumulates in ACT reflects single-use consumables promoted as lifestyle choices by clever marketers. Every item in the Top 10 Individual item count was a single-use-then-dispose item.

“This is a disgrace.”