AROUND this time seven years ago, Christmas was the inspiration that gave a middle-aged, hearing-impaired, autistic man from Canberra an outlet to communicate.

With support from Fraser House staff and Carers ACT, John Beckhouse had his first art exhibition in 2009 named after his favourite drawing, “Magpie Blah! Blah!”

His dad, Wal Beckhouse, says after the exhibition somebody said: “Why doesn’t John use that art to make greeting cards?”

And, with the help of his parents Wal and Pam, John did exactly that, starting an online business featuring his black-and-white art on cards.

Christmas rolled around not long after so John started adding patches of reds and greens to the cards to highlight the holiday season.

John says he loves drawing Christmas cards, but he also makes other cards including birthday and thank-you cards.

“John has drawn since he was very young. His drawings have improved and changed over time,” says Wal.

“They used to be quite detailed, but then John had a few psychotic episodes and now they are neat and clean.” 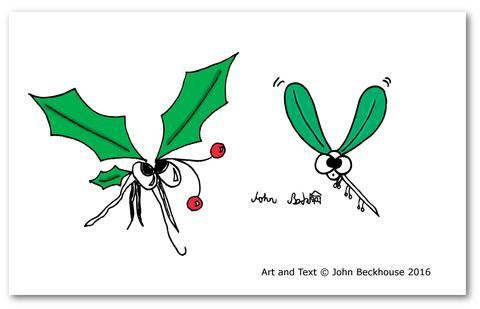 John has become extremely passionate about his cards, making sure they’re absolutely perfect.

Pam says he sits with a pencil first and once he has decided what he likes he’ll go over it in ink.

Wal helps with the cutting of the cards and John makes sure he always has a close eye on him so it’s just right.

Both Pam and Wal are delighted with the positivity and self-esteem they see in John, through his art.

“He runs around a lot and finds it difficult to sit still but this gives him something to work on,” says Pam.

“I can bring a pile of cards and John will pull up a chair and just get into it.

“This all means so much to John, he’s very proud of what he draws and the finished product.”

John’s inspirations come from the world around him, with many things Canberra based shaping his art.

Wal says years ago John watched Santa drive through Canberra handing out presents from the back of a ute and later put this image on to a card.

It’s become quite a successful supply-and-demand business for John.

He has been commissioned to design Christmas and greetings cards for Canberra-based organisations such as ACT and Federal government departments, Canberra Theatre Centre and the Canberra Museum. 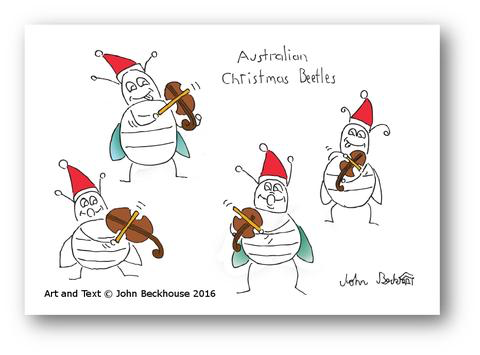 Wal says that John’s most recent cards were for the Canberra Symphony Orchestra after watching “Beatles in Symphony”.

He says even though John still faces issues communicating, he has always wanted to have a real job like other people.

“Through his drawings, John communicates his unique and often humorous view of the world around him,” says Pam.

“Once John gave me a card with a great big diamond ring on it, it was the best treasure he could ever give us.”

Magpie Blah! Blah! via magpieblahblah.myshopify.com or call 62921901 or email pawal@bigpond.com