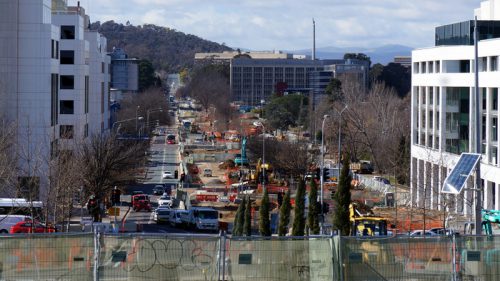 A TRAFFIC switch of vehicles and pedestrians onto the southern carriageway of Constitution Avenue, from east of Allara Street to London Circuit, is scheduled for Monday 15 February 2016 after the morning peak.

A spokesperson for Territory and Municipal Services said this traffic switch, which was scheduled to take place on Saturday 6 February 2016, has been delayed due to wet weather.

“It follows the first stage of the traffic switch carried out in late January when traffic from Anzac Parade to just east of Allara Street was moved onto the new southern carriageway,” the spokesperson said.

“The traffic switch will allow the reconstruction of the northern carriageway and verge to be completed, including paving and landscaping of the verge. Construction of the extension of Constitution Avenue to Vernon Circle will also be the focus of the next stage of works.

“The project is on track for completion in mid-2016 (weather permitting).