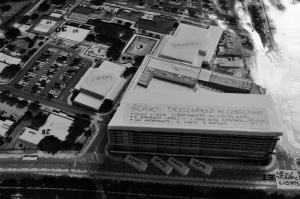 JANE Goffman from the Dickson Residents Group says that following the disappointing actions by the ACT Government to approve a major mixed use development on the shopping centre site in Dickson appeals are being jointly lodged by the landlord of the Woolworths supermarket plus local community associations.

“Local residents groups had exhausted every avenue available to avoid having to spend the time and resources on mounting an appeal to the ACT Civil and Administrative Tribunal (ACAT),” Jane said.

“Last year several thousand petitioned the Assembly for an impact assessment but were ignored. In the past month, residents endeavoured to hold an open public forum on the subject of Dickson shopping centre and its master plan. However they were forced to cancel at the last minute when government representatives announced their withdrawal and the Planning Minister declined an invitation to attend.

“Several groups recently met with the key decision makers and planners to seek answers to specific questions but despite an undertaking to provide answers nothing further has been done.

“The appeal route has been not been taken on lightly. The resident groups involved all have previous experience with ACAT processes. Politicians and others give the false impression that the planning system is fair because the appeals process is available. Unfortunately, it is not common knowledge that most developments are now exempt from any appeal and if residents dare to seek an independent review of the Directorate’s approval, they face an uphill battle on what is far from a level playing field.

“The adversarial ACAT process for dealing with development disputes such as this is incredibly time consuming, emotionally and financially stressful and potentially destructive. The alternative dispute resolution mechanism typically fails because the stakes involved are high and the parties often struggle to properly appreciate each other’s concerns in the short time frame allowed for mediation.

“Resident groups welcomed news that Charter Hall, the landlords of the building occupied by Woolworths, also regard an independent review as necessary. They had leased the building to Woolworths on the understanding that there was a carpark at the front door. That car park could now be a construction zone for the next three years. And then, once the building is complete, the new supermarkets will end up with an indoor carpark while Woolworths and over 50 other local traders will be left with no easily accessible parking available for their shoppers.

“Those lodging the appeals maintain that this development application, which is virtually identical to the one that was knocked back last May, contains serious technical, safety, access, connectivity, interface and amenity problems and a range of other flaws. Plus, to put it simply, the design of the building is grossly inappropriate for the site.

“Residents groups have their work cut out over the next four to six months to see this appeal through. In the short term they are seeking professional support from qualified architects, engineers, lawyers, landscape architects and urban designers and talented students to help prepare their case.

“There is agreement amongst all parties launching this ACAT appeal that a centre that’s attractive, safe, efficient, well integrated and connected with healthy pedestrian flows and good solar access is going to benefit the community as a whole.