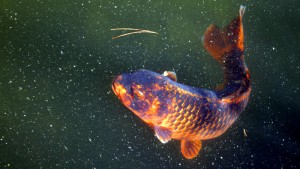 SIMON Corbell is urging the community to report carp sightings as part of the Waterwatch 2016 Carp Love 20C campaign.

Simon said carp was a major threat to native fish and waterways throughout the Murray-Darling Basin and all sightings should be reported on the FeralFishScan website.

“Although carp is easily spotted in the ACT region, not much is known about their movements or breeding locations,” Simon said.

“We need the community’s help to build a picture of where carp breed so we can look at more effective ways to control them.

“The annual campaign took its name from carp’s tendency to display breeding behaviours when the water temperature reaches around 20°C.

“The data collected this year will be valuable in maximising the impact of biological controls such as the carp virus, which is expected to be released in 2018 as part of a national approach to eradicate the fish.

“I encourage people walking or fishing along our rivers and lakes to record the approximate number and location of carp and to post the information on the FeralFishScan portal.

“Participants will be contributing to solving one of the major problems in the Canberra and upper Murrumbidgee waterways.”

More information can be found at act.waterwatch.org.au

Those who report carp sightings will automatically go into the draw to win a Carp Love 20C t-shirt.