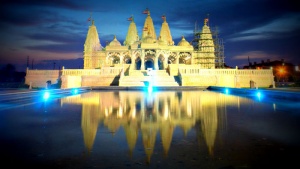 Rajan said it was highly important to meet the religious and spiritual requirements of fast growing Hindu community in various regions of ACT, who needed an appropriate place for worship, rituals, quiet reflection, festivals, ceremonies, weddings, classes, performances and spiritual exercise. He urged ACT Government to urgently respond by offering the reportedly requested land parcel of two hectares in Gungahlin-Hall region of ACT.

“Moreover, it was important to pass on Hindu spirituality, concepts and traditions to coming generations amidst so many distractions in the consumerist society and this proposed temple could help in this direction,” Rajan said.

“According to reports, application for land sale for this temple was submitted to LDA in May 2014 and repeated representations had been made since then. How much more time ACT LDA needed for finding a suitable site for this temple complex? This delay was not fair to the hard working Hindu community which had made lot of contributions to the nation and society in Australia.

“Marble and granite murtis of Hindu deities have already been acquired for installation in this proposed temple, claimed to be Australia’s biggest when completed, which will include three shrines, a hall and community centre, catering to about 15,000 Canberra Hindus; reports suggest and add that this temple will be built according to ancient Agama Shastra guidelines in phases over a period of 5 to 6 years once the land is granted. Various murtis of Hindu deities reportedly to be installed, include Ganesha, Shiva, Durga, Subramanyam, Venketeshwara, Lakshmi, Rama-Sita-Lakshmana, Hanuman, Krishna, etc.

“Objectives of CHM, whose tagline is “A place of worship & learning”, include foster inter-religious harmony and engage in charitable and welfare activities. Currently it organizes monthly bhajans at hired Birralee Scout Hall in Gungahlin, besides weekend bhajans at the homes of devotees. It is building an Internet library of Hinduism and has created online “Mandir Shop” with proceeds going to CHM funds. Krishna Nadimpalli and Anitha Kandukuri are President and Secretary respectively of CHM.

“Hinduism, oldest and third largest religion of the world, has about one billion adherents and moksh (liberation) is its ultimate goal,” Rajan concluded.