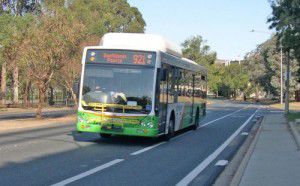 “The Keep Canberra Moving report highlights that completing a transfer (i.e. getting off one bus and getting onto another or onto a tram) was a barrier to using public transport to 75% of infrequent public transport users,” Alistair said.

“However, transfers will be a reality of light rail. Residents in Amaroo, Bonner, Casey, Crace, Forde, Jacka, Palmerston, Ngunnawal and Nicholls will be required to catch a bus to the Gungahlin Town Centre before using light rail to get to the City.

“A second transfer will have to take place for those who work in the Parliamentary Triangle.

“The statistics presented in Keep Canberra Moving confirm the advice provided by the Auditor-General in her report into the Frequent Network last year.

Page 74 of the Auditor General’s Report (Report No. 9/2015 – Public Transport: The Frequent Network) states that:

‘through-routing (‘one seat to destination’) was demonstrably favoured by patrons; its introduction on one route led to a 43 percent increase in patronage, whereas discontinuing through-routing elsewhere saw a 55 percent patronage drop’

“The Canberra Liberals have a plan to ensure commuters don’t have to transfer to get to work every day. We believe our plan for eight Rapid routes and more direct buses is the best way to encourage public transport patronage.

“Instead of building light rail, the Canberra Liberals will make public transport easier and more accessible, for all Canberrans,” Mr Coe concluded.

CityNews - April 1, 2020
4
THE ACT will have to borrow "every cent" from here as government revenues collapse under the weight of responding to the health and economic demands of the coronavirus.