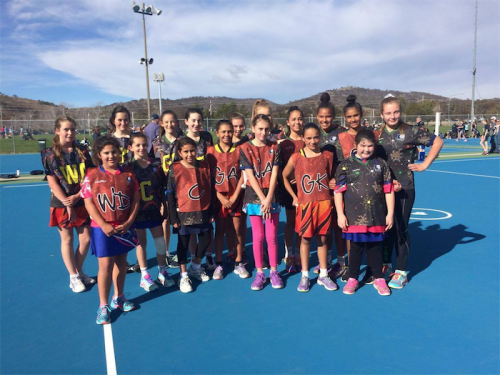 Based in Calwell, TNA is one of eight clubs, associations and individuals from around Australia that received the awards for creating more connected, inclusive and diverse netball communities.

Now in its third year, the awards celebrate individuals, clubs and associations in local communities who go above and beyond to ensure everyone, regardless of background or ability, is welcome in netball.

According to the citation, TNA received the award for “actions and activities to support the engagement of ACT’s Aboriginal and Torres Strait Islander netball community, and providing opportunities to celebrate and share cultural understanding and reconciliation”.

In 2014, TNA created its own Reconciliation Day event to celebrate the contribution of indigenous athletes to netball in the Tuggeranong Valley and the wider Canberra region, and to demonstrate its support for reconciliation between indigenous and non-indigenous Australians.

Special indigenous artwork-themed players’ bibs and T-shirts were created for each team by Mal Johnson, an indigenous member of the TNA community.

TNA president Jonathan Toze said that the award was a fitting celebration of the TNA netball community’s work in fostering inclusiveness and diversity as part of its core values.

“Our association has developed a real willingness and spirit to celebrate and share the contribution of our indigenous athletes and families – we’re a very diverse community, which makes us want to think outside the boundary lines of the netball court,” he said.

“Sport, including netball, just isn’t about playing to win – it’s about sharing life together, including the diversity and richness of our backgrounds that come together at TNA.”