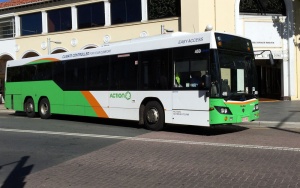 Meegan said the new weekend and weekday timetables would introduce new and extended services, while also meeting the needs of some of Canberra’s fastest growing suburbs.

“The changes to the weekend timetable will come into effect from Saturday 27 August 2016, two days before the weekday timetable changes on Monday 29 August 2016,” Meegan said.

“The weekend timetable will see a number of changes to existing routes that will complement the planned improvements to the weekday schedule, continuing our commitment to providing improved public transport services to Canberra’s growing suburbs.

“There will be adjustments to route 981, which will now service the new Tourist Information Centre at Regatta Point and Westside Acton Village and will align with the weekday route 81.

“Residents in Coombs will also have a weekend service introduced to the suburb through the extension of route 983, which along with the changes to the weekday route 83, will provide a 7 day a week service to Woden and Cooleman Court.

“Following feedback from our customers, there has also been adjustments made to route 980 to provide improved access to people working in and around Fyshwick. Additional services have been introduced on the route 988 to the Alexander Maconachie Centre to allow for changes in changes in visiting hours and there has also been a range of timing changes to allow for better connections.”

“The improvements to both weekend and weekday timetables is the result of a significant amount of work from our Transport Canberra planners who have analysed performance data available from the MyWay and NXTBUS systems as well as reviewing feedback from our customers.

“We want to improve public transport and encourage more people to use it, and we think these changes will benefit our existing customers and make bus travel a more attractive option for the rest of the community.”

For more information, including routes, timetables and maps, visit transport.act.gov.au or call the Transport Canberra Information Line on 13 17 10.