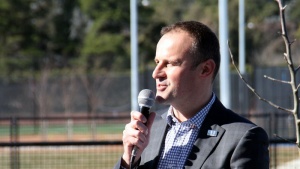 ANDREW Barr has announced six inductees onto the ACT Honour Walk in Ainslie Place, Civic. The Honour Walk recognises the immense contribution made by those who have helped to shape the city of Canberra – now seen as one of the most liveable cities in the world.

“Commissioned in 2005, the Honour Walk provides enduring public recognition of individuals or groups that have made significant or sustained contributions to the ACT,” Andrew said.

“Groups and individuals to be recognised in the 2016 induction are St John’s Anglican Church Canberra, the Jennings Germans, the Taverner family, The Honourable Jeffrey Miles AO, Geoff Pryor and the late William (Bill) Hoffmann OAM.

“The six inductees will be honoured at a ceremony on 28 April at the Honour Walk in Ainslie Place, Civic.

“St John’s Anglican Church Canberra was consecrated in 1845, and is the oldest church in Canberra. It was a focal point for the communities of the Limestone Plains, becoming a place of religious and social significance during the creation of Canberra.

“The Jennings Germans are a group of 150 single German carpenters and joiners who paid their own way to Canberra after World War II to construct 1850 homes for AV Jennings. Houses they built still remain today in Yarralumla, Ainslie, O’Connor, Turner and Deakin.

“The Taverner family, Canberrans since 1928, managed Manuka Pool from 1955 until 2012, and always strived to conserve the heritage aspects of the building and grounds.

“The Honourable Jeffrey Miles AO was Chief Justice of the ACT Supreme Court from 1985-2002, during which time the ACT achieved self-governance. He played a leading role in ensuring that the constitutional arrangements for the Territory included the securing of judicial independence.

“Geoff Pryor spent 30 years drawing cartoons for the Canberra Times from 1978-2008. Known for his wit and incisiveness, his cartoons reflected the fears, frustrations, hopes and joys of Canberrans. Geoff will be joining his father Lindsay Pryor AO who was honoured on the Walk in 2010 for his role in creating Canberra as ‘the bush capital’.

“The late William (Bill) Hoffmann OAM re-established the Canberra City Band in 1947 and was Bandmaster for three decades. He introduced instrumental music in Canberra’s schools and was senior music critic for the Canberra Times from 1962 to 2009 and a founding member of the Canberra Critic’s Circle.

“I look forward to joining these inductees, their families and representatives at the ceremony which will also be open to members of the public.”

0
See it, even if you hate subtitled dialogue. reviewer DOUGAL MACDONALD has no qualms about the Oscar-award top dog "Parasite".