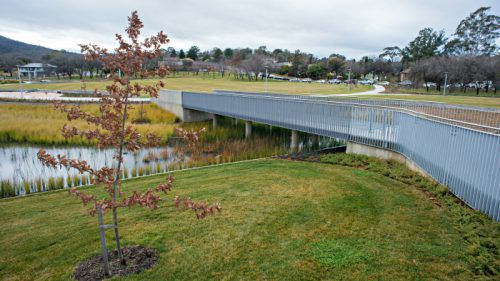 THE Land Development Agency has announced that two of the ACT’s newest parks, in Campbell and Greenway, have been named after prominent Canberrans.

“The one-hectare Nina Farrer Park in Southquay Greenway is named after a local pioneer.

“The naming of the parks was determined after feedback from the community.

“General Hassett attended the Royal Military College, Duntroon, and served in Palestine in World War II. He created a record for accelerated promotion in the Australia Army – lieutenant at 20 years of age, captain at 21, major at 22 and lieutenant-colonel at 23. He later served in Korea and Malaya.

“He became Chairman of the Chiefs of Staff Committee in 1975, and in 1976 was appointed the inaugural Chief of the Defence Force Staff. He retired in 1977. His daughter Dr Sandra Hassett, of Red Hill, said that her father would have been touched by having the park named after him.

“Nina Farrer (nee Fane De Salis) arrived in the Tharwa district in 1855 with her parents. In 1882 she married William Farrer, who developed several varieties of drought and rust-resistant wheat that made possible a great expansion of Australia’s wheat belt. The couple lived at Lambrigg near Tharwa from 1894, where William established his experimental wheat plantings and laboratory.

“Mrs Farrer was held in high esteem by the local community and known for her hospitality. Her encouragement and devotion to her husband contributed to his success, and she is buried on the property beside him. Her great-great-niece Mrs Adrienne Bradley, who lives in Canberra, said that the family was very much in favour of naming the park after Nina Farrer.”

Sponsored Content - June 4, 2020
0
Sponsored content from a valued advertiser. LOCALLY owned and operated (and proud of it!), the family-run Mitchell business, Therma Quilts, has been keeping Canberrans warm...