AN excited group of young musicians from Goulburn Primary School joined professional musicians from the Canberra Symphony Orchestra on stage this morning at Llewellyn Hall for a thrilling concert. 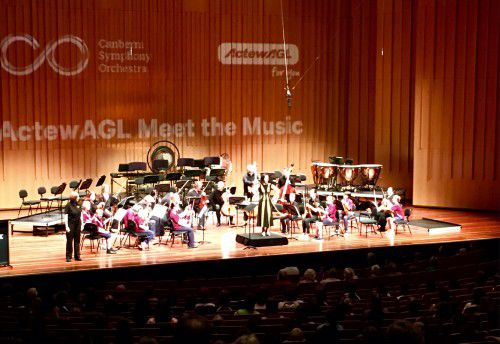 Viewed by members of the public, including visitors from aged care facilities in Canberra and the young instrumentalists’ classmates, the event was part of ActewAGL’s ‘Meet the Music’, intended as an educational introduction to the world of symphonic music.

Hosted by 2CC’s Tim Shaw, who told those present how ActewAGL and the CSO would remain corporate partners until 2019, the occasion was an affirmation of the power of music in young people. ActewAGL CEO Michael Costello spoke of the significance of Goulburn as a regional centre, praising Goulburn Regional Conservatorium of Music for providing musical opportunities to young people, many of whom had no previous musical background.

Paul Scott-Williams, director of the Conservatorium, which ranges from Mittagong to Yass and  wraps around the ACT, told those present how lucky they were to have as their patron and soloist Kirsten Williams (Associate Concertmaster of the Sydney Symphony Orchestra) working with them on the  brand-new “Goulburn Concerto” by Sean O’Boyle.

Lately, he explained, the Conservatorium, who run the Goulburn Strings Project, had engaged in some crowdfunding. Four and a half years ago they had just 5 violins for 59 students, but a generous the donation of 50 new violins meant that now they have 75 violins for 75 students,

Conductor Anita Collins from the University of Canberra took the podium to rousing cheers, to begin the morning’s activities.

What do you have in your hand? “A stick” came the answer. Yes but a special stick, a baton – “can you say baton?” They could and waved to demonstrate what you do with it.

Collins then introduced the professional bassists, the soloist Williams, and the young instrumentalists from Goulburn and the remaining CSO players for Melbourne, who did a bit of tuning up and showed us how they could play together – “Can everyone say “Unison?”  They could,

What followed was the first movement of O’Boyle’s concerto, dramatic but with a lilting quality. As we moved into the second movement, Collins had two Goulburn students demonstrating bowing and plucking techniques. “Pitz!” [Short for pizzicato) the kids shouted from the stalls

The second movement proved more difficult so it helped to have the mature string players for giving support. I spotted CSO concertmaster Barbara Jane Gilby in the line-up professionals, so they weren’t’ stinting for this exercise.

The third movement had a ‘motif’ and even better, an Oompapa, so those on one side did the oom and the other side the papa, raising the roof.

The musicians continued with the third movement before bringing what was described to us as “little chapters in the book” to a satisfying ending.

“We save up all the clapping for the very end,” they were told before the whole concerto was played. Nobody took the slow slightest bit of no notice of that and applauded between each movement. Screams, squeaks and hoots greeted the conclusion as bouquets were handed around,

Composer O’Boyle is in the US at the moment so could not be here for the premiere, but just one word sums up this initiative– ‘inspiring’.