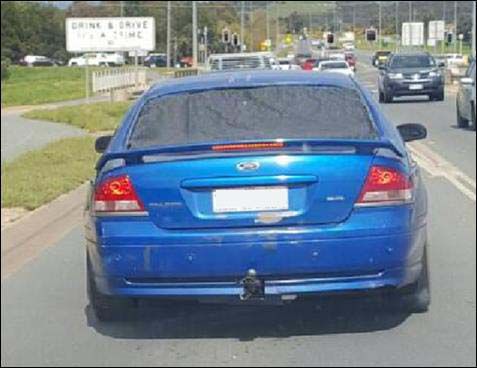 ACT Policing is seeking witnesses to a collision that occurred on Kosciuszko Avenue in Palmerston on Saturday.

Around 11am police observed a blue Ford Falcon driving along Hibberson Street in Gungahlin with number plates that did not match the vehicle type.

The blue Ford Falcon (pictured) had a missing rear windscreen, which appeared to be covered in black material.

A short time later the vehicle was observed driving along Kosciuszko Avenue. As police approached the vehicle the driver accelerated and collided with the vehicle in front before mounting the median strip and colliding with a police officer. The vehicle, which sustained damage to the front end and a broken windscreen, sped from the scene on the incorrect side of Kosciuszko Avenue.

Police located the vehicle in Charnwood later that afternoon.

The police officer received minor injuries and was conveyed to The Calvary Hospital.

Police are asking for anyone who may have witnessed the car accident? or who has seen a blue Ford Falcon in the Gungahlin area to contact Crime Stoppers on 1800 333 000 or via the Crime Stoppers ACT website. Please quote reference number 6021049.

Michelle Grattan - May 26, 2020
2
The Prime Minister outlines principles that will guide the pursuit of a “JobMaker plan for a new generation of economic success”, writes political columnist MICHELLE GRATTAN.