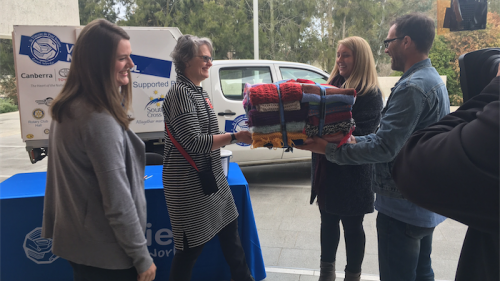 Just over a month ago, Canberrans were invited  to pull out their knitting needles and crochet hooks and get started on creating useful items for cold people in need and hundreds of donations streamed in not just from here, but from Lyneham to Darwin.

The resulting community-made winter woollies were formally handed over to St Vincent de Paul yesterday afternoon in the middle of the NPG’s third winter festival, a signal, manager of Learning Programs at the gallery, Krysia Kitch, said ?that we “should celebrate winter in Canberra, not just whinge about it.”

Erin Macarthur and Gary Crowder from St Vinnie’s were found packing  scarves, socks and beanies into their van for distribution to the homeless in Canberra, Goulburn and further west – everywhere in the boundaries of the Catholic Archdiocese of Canberra& Goulburn.

According to Kitch, the gallery had been deliberating as how it could make the event about a bigger community.

Last year they raised funds to buy swags for the homeless, but this year they decided on a more formal collaboration and, together with St Vinnie’s put out a call asking people to knit scarves and beanies and socks for the homeless. While they expected a response  from the ACT and  were thrilled when Lyneham Primary School got on board,  they were quite astonished  to get knitted items from as far as Perth and Darwin. As well, a group of knitters from Brisbane had sent a large contribution of knitted works, saying, “We live to knit and crochet but we can’t use what we knit.”

The knitting frenzy coincided with the lead up to the gallery’s Winter Festival, which also included performances, live music and ice sculptures, one of them a huge interpretation in ice of Evert Ploeg portrait of actor Deborah Mailman.

Each year, Kitch said, the gallery engaged a featured artist for the Winter Festival, which this year saw Dan Edwards wrapping pillars with wool.

Most impressive of all was the sight of fathers helping their kids knit, bling their beanies and create snow-flakes.