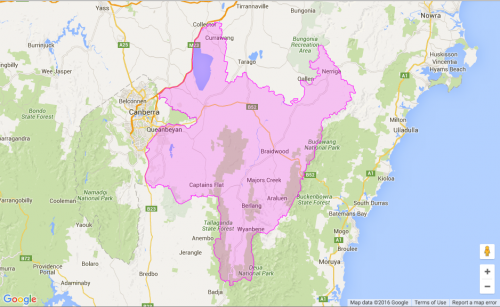 THE NSW Government has announced they are pushing ahead with a merger of Palerang and Queanbeyan councils:

On 12 May 2016 the Minister for Local Government, Paul Toole, announced the newly formed “Queanbeyan-Palerang Regional Council”.

— Each new council will receive up to $15 million to invest in community projects like junior sporting facilities, playgrounds and library or pool upgrades.

— Each new council will receive up to $10 million to streamline administrative processes and cut red tape. (Unspent funds may be redirected to community projects)

Ratepayers, in new council areas, will have their rates protected against future increases, meaning they will pay no more for their rates than they would have under their old council for 4 years.

Elections for new councils will take place on 9 September 2017.

In the meantime Queanbeyan Mayor Tim Overall will be the administrator of the new entity and Peter Tegart will be the interim general manager.