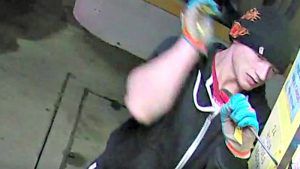 POLICE are seeking to identify this alleged offender in relation to multiple burglary and property damage offences at three self-serve carwashes located in Calwell, Tuggeranong and Belconnen on Thursday 7 July 2016.

At approximately 4.00am, the offender caused significant damage at Classic Car Wash Belconnen whilst attempting to gain access to the money in the coin machines. The offender then attempted to do the same thing at the self-serve car washes at Calwell and Tuggeranong.

The CCTV footage shows the offender, who is described as Caucasian in appearance and about 163cm (5’5”) tall, wearing a black hooded jumper and dark tracksuit pants with a white stripe. At Belconnen he was wearing a dark baseball cap and at Calwell and Tuggeranong, a black beanie with an orange image embroidered on the side.

If you recognise this man, or have any information that could assist police, please contact Crime Stoppers on 1800 000 333, or via crimestoppers.com.au quoting reference number 5982827. Information can be provided anonymously.