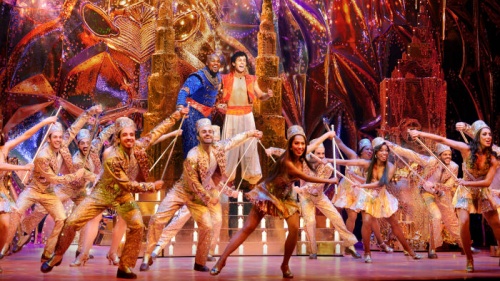 HEAVEN on a kebab stick, definitely guaranteed to please every Tom, Dick and Hassan, Disney’s lavish new Australian production of the show that’s been breaking records on Broadway since March 2014, has finally opened in Sydney, and it’s every bit as good as the pre-show hype promised.

Based on the classic Academy Award-winning animated film, this production of “Aladdin” is one of the largest productions every mounted in Australia. It boasts a cast of 37 singers, dancers and acrobats, all of whom give the appearance of having as much fun as the audience. As well there are 337 ridiculously lavish, drop-dead-gorgeous costumes, (count them) and 70 tons of truly amazing scenery. (Spoiler alert … if this review is starting to sound like a rave …then read no further… it is!)

This performance was the final preview. The theatre was packed. “All the previews have been sold out” a helpful young barmen confided. The buzz around the theatre was palpable.

The opening notes of the overture were greeted with applause, which turned to vociferous screams when the Genie, in the person of Broadway actor Michael James Scott, made his entrance for the eye-popping opening number “Arabian Nights”.

James Scott was a member of the original Broadway cast of “Aladdin”, and his performance in this production is sheer Broadway magic. Quite literally as it turns out, for along the way, besides singing, dancing, flirting with the audience, and dropping in some local references to Vegemite and Wagga Wagga, he spectacularly executes a series of dazzling illusions which leave his audience gasping.

Handsome young WAAPA graduate, Ainsley Melham, is delightfully dorky as the bumbling hero, Aladdin, who defies all odds to win the love of the beautiful princess Jasmin, played by another Broadway alumnus, Arielle Jacobs, looking and sounding exactly as a Disney princess should. Melham and Jacobs lose no time capturing each other’s hearts, as well as those of the audience, especially in the spectacular flying carpet scene, “A Whole New World”. (Actually the magic carpet crash-landed at this performance, resulting in the house lights coming up for 15 minutes while emergency repairs were carried out. No-one seemed to mind though, it just added to the excitement and a good-natured cheer went up as the show resumed).

Aladdin receives great support from his three besties and partners-in-crime, Kassim, (Adam-Jon Fiorentino), Babkak, (Troy Sussman) and Omar, (Robert Tripolino) who not only engage in comical sword-fights while eluding the Bagdad constabulary, but also exhibit some impressive terpsichorean skills.

Adam Murphy is appropriately dastardly as the evil wizard, Jafar, while Aljin Abella, (seen in Canberra last year as Monkey in “Monkey- Journey to the West”) threatens to steal the show with some really funny one-liners, as Jafar’s monkey-like off-sider, Iago.

The script is witty and very funny, even for the many littlies in the audience who could be heard gurgling with delight. The new songs are tuneful and catchy, especially the soaring “Proud of Your Boy”, thankfully restored, having been cut from the film. However, it is the amazing spectacle that makes this show one not to be missed.

Casey Nicholaw’s choreography, especially for the male dancers, is inventive and exciting. His staging of the production numbers is masterful. Music theatre devotees watching the dazzling “Friend Like Me” number cleverly referencing Broadway classics like “West Side Story”, “Forty Second Street”, even Disney’s own “Beauty and the Beast”, and the spectacular “Prince Ali” scene with its endless parade of costumes, will feel they’ve died and gone to heaven. It’s that good.

But don’t just take the word of this reviewer, get yourself a ticket and see for yourself. On second thought, take a child or two along with you. This is a show they’ll never forget.

Richard Calver - July 30, 2020
0
"Wine Australia says that the fastest growing segment of the wine market was the $6-$9.99 a bottle market with the value of sales in that segment growing 31 per cent in the month to early April," writes wine columnist RICHARD CALVER.