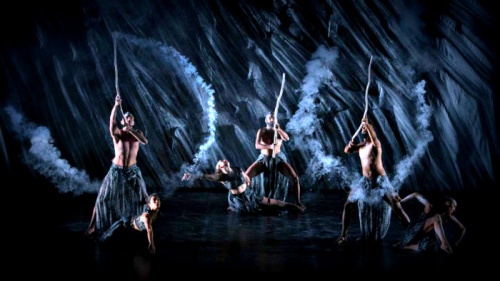 FRESH from its successes earlier this week dominating the dance section of the 2016 Helpmann Awards, Bangarra Dance Theatre is now presenting its newest program, “OUR land people stories”, in the Canberra Theatre, where its long and loyal association with Canberra audiences who have watched its development almost since its inception 27 years ago, was evidenced in the warm reception given to this program at its opening performance.

For the last 25 of those years, Stephen Page has been at the helm of the company, which he has led by example by creating a succession of remarkable dance works which have won it world-wide recognition for its powerful telling of indigenous stories through the medium of contemporary dance.

“OUR land people stories” follows in that tradition in that it consists of three separate works, one created by Page, and the other two by dancers performing in the company, which tackle disparate aspects of the indigenous storyline. All three works feature striking set designs by Jacob Nash, superb textural costumes by Jennifer Irwin, and stunning lighting design by Matt Cox.

Jasmin Sheppard’s work, “Macq” focusses on a non-indigenous historical figure, Governor Lachlan Macquarie and his involvement in a massacre of aborigines at Appin in 1816. Performed to an evocative soundscape by David Page, his last for the company, the work begins with a beautifully-lit tableau of women shielding, we learn as they eventually separate, a young woman,
(Nicola Sabatino), grieving, pieta-like, over the lifeless body of a man (Leonard Mickelo).

The young woman wraps herself around the man’s body desperately trying to reanimate him. This poignant scene suddenly dissolves into a jolly picnic, given by Macquarie, (brilliantly danced by Daniel Riley), for the local aborigines, following which we see Macquarie and an aboriginal man, (Beau Dean Riley Smith) arguing over territory in a strikingly realised scene performed around a long table.

Employing her facility for strong imagery, with a confident choreographic style, Sheppard’s depiction of the horrible events which inspired the work, ends on a note of hope rather than accusation, inviting the viewer to reflect on the repercussions of this little-known moment of history.

Cousins, Beau Dean Riley Smith and Daniel Riley explore their own complex Wiradjuri family ties in the second work, “Miyagan”. This work is abstract, affectionate , mysterious and joyous, involving the entire company in often luscious, close-to-the-ground, sweeping choreography which is a joy to watch, and no doubt, to dance. A catchy score by Paul Mac provides plenty of changes in tempo and mood, and Jennifer Irwin’s costumes include emu feather hoods which suggest both mysterious ancestral spirits and flocks of cheeky birds. Integral to the work are Jacob Nash’s amazing sculptural feathers which increase in number as the work progresses until the entire cast is enclosed in a beautiful lyre-bird habitat.

The final work, which occupies the entire second half, is a stunning, mystical creation by Stephen Page entitled “Nyapanyapa”, inspired by the paintings of Nyapanyapa Yunupingu. The set design by Jacob Nash includes huge blow-ups of Nyapanyapa’s paintings, which are abstract depictions of events which have occurred in her life, and as each painting appears out of the darkness, these events are translated into dreamlike images by the dancers.

The first of paintings recalls an event when Nyapanyapa almost lost her life when she was gored by a buffalo. In this sequence Waangenga Blanco conjures up a frightening image of a buffalo with huge horns strapped across his shoulders. Nyapanyapa herself is vividly interpreted by Elma Kris, who provides a compelling connecting link between each of the sequences.
The entire company rapidly change characters and costumes as they portray an endless succession of bush apples, lost Wendys, seashells, nibblets, and soul spirits with complete conviction in a continuous flow of mesmerising sequences which include an especially beautiful passage involving smoke sticks. Once again, Stephen Page demonstrates his mastery of the choreographic style he has developed over the years which has become the indelible signature stamp identifying Bangarra Dance Theatre from all others.