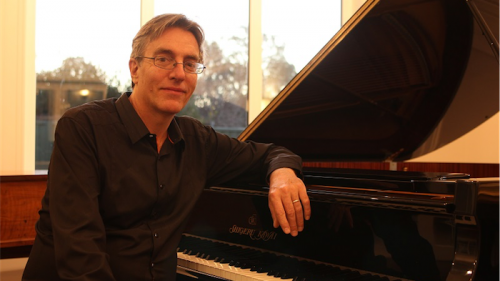 HOW much more anachronistic can it be – a modern-day, living composer writing in the style of composers of bygone eras.  It’s risky, too; inevitable comparisons will be made.

Canberra-based composer and pianist, Michael Dooley has written a suite of compositions in the style of music from baroque to modernist.  There are more than just hints of the writing styles of the great composers of those eras, but all of the compositions stand steadfastly on their own as works of great quality and freshness, like new spring flowers on much-loved plants.  Mozart et al would have enjoyed them.

Dooley himself opened the program with his “Waltz in A Major”.  He took the tempo a little too quick for a waltz and lost the lightness and clarity of this delightful piece.  Expression lost out, too, belying its romantic era styling.

But for the rest of the program, Dooley and four other very fine pianists gave virtuosic performances of works that required a great deal of technical proficiency and allowed much scope for interpretation.

The longest work was the three-movement “Sonata in Eb Major”, written in the classical style but with an eye firmly on the romantic period.  Emily Leong played it stylishly and thoughtfully.

Aaron Chew’s sensitivity, expressiveness and assuredness shone through in his performance of the very difficult Russian-inspired “Pilgrim Fantasia”.  And he showed his technical wizardry in the “Etude in G Minor: In Pursuit of the Mouse”, his hands flying across the keyboard at lightning speed.

Andrew Rumsey was brilliant, too, in the impressionist piece “In an Eastern Garden”, which Dooley described as Debussy-esque.  Rumsey created images evocative of SE-Asian peace and calm, rain and storm.   Rumsey also played “Toccatta – Le Tourbillon (The Whirlwind)”.  It should be attempted only by virtuosos.  Rumsey delivered decisively.

Another Canberra composer, Sally Greenaway, played Dooley’s “Reflection”, and proved to be perfectly cast.  Greenaway and “Reflection” were as one in this beautiful, romantic-style piece, with each listener able to take themselves effortlessly to their own special somewhere.

The most significant of Dooley’s other performances was the world premiere of “Theme for Miranda”.  This composition was written in a contemporary but thoughtful style, commissioned by a donor to Dooley’s crowd-funding for his “Anachronisms” project and dedicated to an audience member, who didn’t know it was happening.  It was a very special moment and Dooley played the piece beautifully.

To close the program, all five pianists played in duo rotation (don’t even ask!) “Tango in Chic”, a most beguiling and entertaining performance.

Not satisfied, the audience demanded an encore.  Dooley improvised brilliantly on a theme by Britney Spears.  He has much to be proud of.