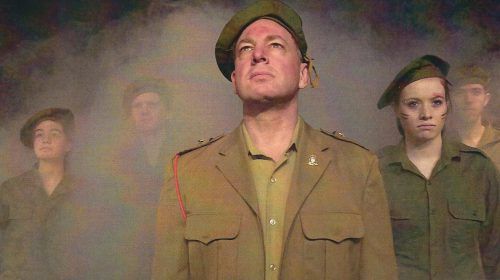 IN James Scott’s play, "Henry Five", a small theatre company returns to put together a production of "Henry V" for a Shakespeare Festival after a disastrous performance of "Coriolanus" five years before.

They have virtually no money for sets and costumes and few actors to perform the work, meaning there will have to be major cuts to the text of the play.

Everyone’s doubts are overcome by the enthusiasm of the director and a determination to beat a rival company and we see the finished production as presented on the opening night of the festival.

It’s a clever idea to bookend the play with a modern-day story showing a group of actors beset by limitations and struggling to put on a major Shakespearian play.

For anyone who’s ever worked with a small theatre company, it’s easy to identify with the problems they face.

The problem with this show is that the opening story is so much fun that we feel we’re in for a "Noises Off"-type of evening.

However, their "Henry V" is then presented seriously and, although well acted and directed, isn’t what we expected or wanted.

The show does have really fine performances by this group of five actors. All are adept comedians as demonstrated in the opening theatre company story and in the "Henry V" presentation everyone gives strong characterisations and plays with great assurance.

Direction by James Scott is imaginative and makes an asset of the limitations in set, props, costumes and number of cast members. The battle of Agincourt is presented as a series of tableaux that is startlingly effective.

While the mix of comedy and serious drama didn’t quite work, the performances and the direction were impressive.