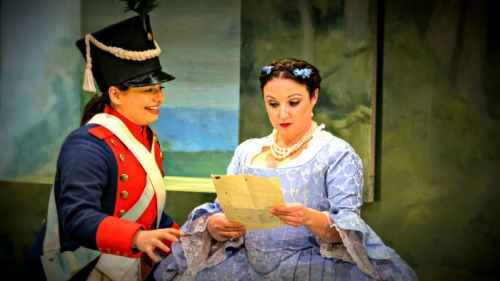 THE advertising certainly lived up to its promise: Mozart’s “The Marriage of Figaro” was a whole lot more fun than an episode of Downton Abbey set to music and much more intriguing. This Australian Opera production, in English, of Michael Gow’s adaptation of Mozart’s marvelous music and Lorenzo da Ponte’s clever libretto, was funny, entertaining and highly musical.

Set in Seville (where else?), “Figaro” is like a Shakespeare comedy and a Gilbert and Sullivan operetta rolled into one. There’s a lost pin, a bamboozled Count, aristocrats wanting to run off with servants, Figaro’s intended being a previous girlfriend of the good doctor who turns out to be Figaro’s Papa, unpaid loans, suspicions of unfaithfulness, plots to spoil the wedding and a female playing the role of a male, who at one stage is disguised as a girl. And that’s just a taste of the myriad twists and turns in this most charming of singspiels

So, does it all work out in the end? Do Figaro and Susanna get married? Well, I’m not telling: it would be like revealing the end of a movie. But the whole thing happens in just one fast-paced mad capped day.

Conductor, Paul Fitzsimon did a very fine job indeed of keeping the chamber orchestra and singers tight as a drum all the way through and set a cracking pace with the well-known overture.

All the principals – and there were lots – had fabulous voices that carried right throughout the expansive Canberra Theatre unamplified. Acting was lively and well-choreographed.

There were a couple of standouts on the acting front – Antonio the gardener (Tom Hamilton) and the flamboyantly camp, music teacher and gossip, Don Basilio (Brad Cooper). Agnes Sarkis, playing Cherubino (the female/male/girl) was very good, too.

Pleasingly, Canberra was well-represented. The children’s chorus, made up of the junior voices of Wild Voices Music Theatre and the Woden Valley Youth Choir, together put in a very professional and delightful performance.

The set was simple but functional and surprisingly versatile, beautifully decorated with what might have been the scene of the yonder wood, or perhaps a mural so typical of the time for aristocratic mansions. Lighting was equally simple but very effective. And I loved the sheer curtain pushed and pulled across the stage by the actors, supported by clever lighting, to separate the four acts.

Mozart must surely have loved writing the music for “Figaro”. He did it in only six weeks. It is pure fun from beginning to end. But don’t be fooled: this music is very complex and difficult to perform.

It takes quite a deal of artistry to do it justice and Australian Opera did it beautifully.