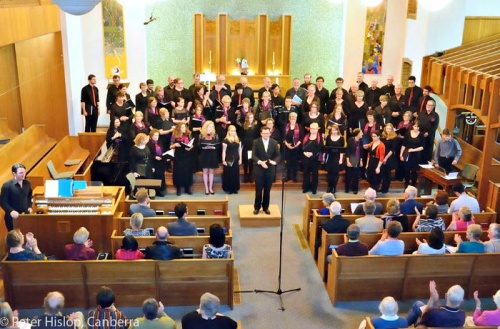 I have not had the pleasure of hearing the Oriana Chorale for several years, but my memories of the choir have always been positive. Their concerts have always been interestingly and diversely programmed, with the singing of a high quality.

This concert, of songs based around the text of the biblical ‘Song of Solomon’, was no exception. Pieces from the full choir were broken up by the inclusion of one work in each half by the Luminescence Chamber Singers, a group of five young singers who are of an age where they could well be the grandchildren of some of the choir. Supplying occasional organ accompaniment was James Porteous.

The program was presented more or less chronologically, with music ranging from the late renaissance to a new work composed this year. The first three works were from the very early 16th century, followed by three 17th century works, including one from the Luminescence Chamber Singers. They did an excellent job of a Heinrich Schutz madrigal, notwithstanding that the organ continuo began in what seemed to be a different key and a more contemporary piece in the second part of the concert. The first half was rounded out by a jaunty madrigal from Thomas Tomkins and an odd setting of the biblical text of the Song of Soloman by a young Henry Purcell.

The second half started with a work by eighteenth century American choral composer, William Billings. Working within a tradition of American sacred music, in Billings’ work can be heard a fascinating precursor to the 19th century shape-note style of rural sacred music singing. Another highlight of the second part of the concert were an antiphon ‘Tota pulchra es’ by Anton Bruckner, featuring Cody Christopher, the tenor soloist from the Luminescence Chamber Singers who is also a regular choir member. The solo voice contrasted marvellously with a big sound from the choir.

We were also privileged to hear the premier performance of another setting of the Song of Solomon text by Canberra composer (and choir member) Phil Batterham. The first section was built around big, slow lush chords that seemed to endlessly grow and shift, with the second part more straightforward but yet as powerful.

One aspect of the Oriana Chorale that I have always enjoyed is their willingness to push the limits of what that can do musically. One of the early pieces of the concert, by 16th century English composer Robert Fayrfax was mentioned in the program notes as written for ‘high trebles’. This pushed the sopranos a note or two higher than they seemed entirely comfortable with and the whole thing lost some structure in the middle. Similarly, a work by Grieg in the second half had a few mildly wobbly bits. This was much more sophisticated music than the Billings work that preceded it and challenged the choir.

It is worthwhile noting that while conductor Peter Young does not talk to the audience directly, the program included four pages of informative, well written notes on the composers and the works performed. Such notes do help the enjoyment of a concert.